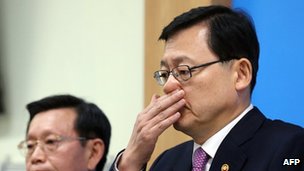 South Korea has suspended operations at two more nuclear reactors over the use of unauthorised parts.
The Nuclear Safety and Security Commission also delayed the start of operations at two other reactors, but said there was no public safety threat.
Two reactors were suspended in late 2012, amid a scandal over parts with fake safety certificates.
South Korea has 23 nuclear reactors which supply about a third of its electricity needs.
The suspension of two reactors raised questions about power supply over the summer, local media said.
Engineers jailed

The two reactors to be suspended pending replacement of the unauthorised parts are the Shin Kori Reactor 2 and Shin Wolsong Reactor 1, the commission said.
Shin Kori Reactor 1, which is currently undergoing maintenance, and Shin Wolsong Reactor 2, a new reactor, will also not operate until parts are replaced.
All components used in South Korean nuclear reactors require specific certification.
But last year a minister revealed that some parts used in two reactors at the Yeonggwang nuclear plant had not been properly vetted.
Knowledge Economy Minister Hong Suk-woo said these were "non-core" parts that included fuses, cooling fans and power switches - items which could be used in other industries but needed international certification for nuclear power plant usage.
Earlier this month, six nuclear power engineers and suppliers were jailed in connection with the supply of components with forged safety certificates mainly to the Yeonggwang complex.
at May 28, 2013