Syrian women for sale in Jordan 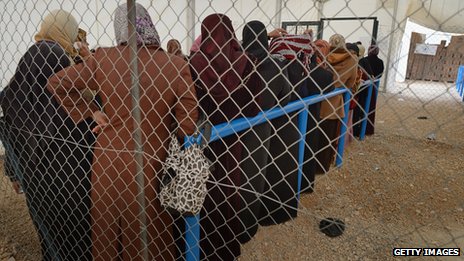 Before the war began, Kazal was in love with her neighbour in Homs. "He was 20 years old and I dreamed of marrying him one day," she says. "I never thought I would marry someone I didn't love, but my family and I have been through some hard times since coming to Amman."
Kazal says she is 18 but looks much younger. She has just got divorced from a 50-year-old man from Saudi Arabia who paid her family about US $3,100 (UK £2,000) to marry her. The marriage lasted one week.
"I lived with my husband in Amman, but we weren't happily married. He treated me like a servant, and didn't respect me as a wife. He was very strict with me. I'm happy that we're divorced."
Her huge, blue eyes fill with tears when she talks about the marriage.
Continue reading the main story

Andrew HarperUNHCR
"I agreed to it so I could help my family. When I got engaged I cried a lot. I won't get married for money again. In the future I hope to marry a Syrian boy who's my own age."
'Survival sex'
Andrew Harper, the Representative of the UN Refugee Agency (UNHCR) in Jordan, is concerned that some of the 500,000 Syrian refugees in the country are increasingly turning to such desperate measures.
"We don't have enough resources to give aid to all those who need it. The vast majority of refugees are women and children. Many of them are not used to going out to work, so survival sex becomes an option."
His office in central Amman is surrounded by hundreds of newly arrived refugees, waiting in long lines to register for aid. He says the UNHCR has intervened with some families who have been offering their daughters up for early marriage.
"I can't think of anything more disgusting than people targeting refugee women… You can call it rape, you can prostitution, you can call it what you want but it's preying on the weakest.
"The government and people of Jordan are doing what they can but people are poor and we have to get more resources into the community so families aren't forced into something that deep down I believe they don't want to do."
Kazal's agreed to the marriage to help her family
Short-term marriages between men from the Gulf and Syrian girls reportedly happened before the war began. But Kazal's mother Manal, who dresses conservatively like her daughter in an abaya and headscarf, says she would have never considered such an arrangement in the past.
"Life here is very hard and we receive very little aid. We have a baby who needs lots of milk every day, and we can't afford to pay the rent. So I had to sacrifice Kazal to help the other members of the family."
She says that the marriage was arranged by an Amman-based NGO called Kitab al-Sunna, which gives cash, food and medicines to refugees. It is funded by donations from individuals across the Arab world.
"When I went for help at the NGO they asked to see my daughter. They said they would find a husband for her."
Syrian matchmaker
The director of Kitab al-Sunna, Zayed Hamad, says that he is sometimes approached by men who want to marry Syrian women.
Continue reading the main story

It's not prostitution because there's a contract between the groom and bride... How are we supposed to live when the NGOs give us so little help? ”

Um MazedMatchmaker
"They ask for girls who are over 18. They're motivated by helping these women, especially those whose husbands died as martyrs in Syria. Arab men see Syrian women as good housewives, and they find them very pretty, so traditionally it is desirable to marry one."
Um Mazed is a 28-year-old Syrian refugee from Homs who has started earning money by arranging marriages between Syrian girls and Arab men.
In a grubby room covered with mould, she fields phone calls from prospective brides and grooms.
"The men are usually between 50 and 80, and they ask for girls who have white skin and blue or green eyes. They want them very young, no older than 16."
She says she has presented more than a hundred Syrian girls to these men, who pay her a fee of US $70 for an introduction, and about US $310 if it results in a marriage.
"If these marriages end in divorce after a short time, that's not my issue, I'm just the matchmaker. As far as I'm concerned it's not prostitution because there's a contract between the groom and bride."
Um Mazed means "Mother of Mazed", one of her three children. She doesn't want her identity known because she's ashamed of what she is doing for a living, but claims she has no choice.
"How are we supposed to live when the NGOs give us so little help? How are we supposed to pay our rent? We're not getting enough help to live decently, that's why I'm doing this - so my family and I can survive."
at May 10, 2013