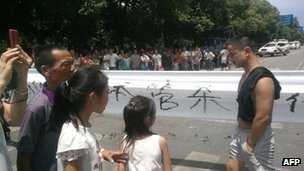 Six urban security personnel have been detained by police investigating the death of a fruit seller in southern China, state media say.
Deng Zhengjia, in his 50s, died on Wednesday in Chenzhou City, Hunan.
He was hit with a weight from a set of scales after a row erupted with the officials, known as "chengguan", Xinhua reported, citing Mr Deng's niece.
The six are being held on suspicion of intentionally harming others, added the news agency.
Continue reading the main story

Who are the chengguan?

The chengguan, or Urban Management Law Enforcement force, support the police in tackling low-level crime in cities and have become unpopular with the Chinese public after a series of high-profile violent incidents.
"They are now synonymous for many Chinese citizens with physical violence, illegal detention and theft," said Sophie Richardson, China director at Human Rights Watch (HRW), in a report last year.
The row in Linwu county, Chenzhou, erupted after Mr Deng, 56, and his wife tried to sell home-grown watermelons at a scenic riverside spot without a licence, the county government said in a statement.
Having asked the couple to leave, "the enforcers temporarily confiscated four of the watermelons, requesting that the couple sell their melons in an authorised location instead".
The couple began "insulting" the officers when they encountered them again 50 minutes later, the statement said.
"The enforcers tried to reason with the couple, the dispute between the two sides became a physical conflict, and in the process Deng Zhengjia suddenly collapsed and died," it added.
There were anti-chengguan protests in Linwu on Wednesday, and the fruit seller's death has also sparked outrage on China's microblogs.
In July 2011, the death of a disabled street vendor who was reportedly beaten by local law enforcers sparked a riot in Guizhou province.
at July 20, 2013