Dolphins 'call each other by name' 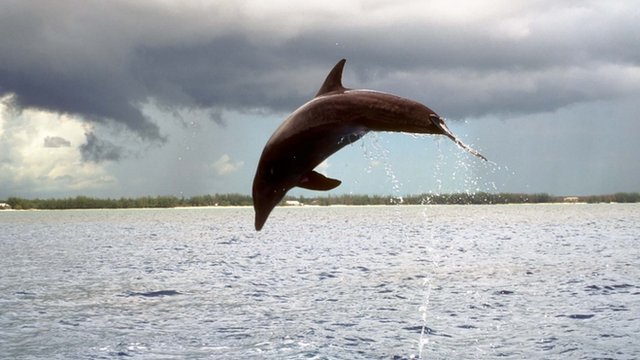 Scientists have found further evidence that dolphins call each other by "name".
Research has revealed that the marine mammals use a unique whistle to identify each other.
A team from the University of St Andrews in Scotland found that when the animals hear their own call played back to them, they respond.
The study is published in the Proceedings of the National Academy of Sciences.
Dr Vincent Janik, from the university's Sea Mammal Research Unit, said: "(Dolphins) live in this three-dimensional environment, offshore without any kind of landmarks and they need to stay together as a group.
"These animals live in an environment where they need a very efficient system to stay in touch."
Signature whistles
It had been-long suspected that dolphins use distinctive whistles in much the same way that humans use names.
Previous research found that these calls were used frequently, and dolphins in the same groups were able to learn and copy the unusual sounds.
But this is the first time that the animals response to being addressed by their "name" has been studied.
Continue reading the main story

Most of the time they can't see each other, they can't use smell underwater... and they also don't tend to hang out in one spot”

Dr Vincent JanikUniversity of St Andrews
To investigate, researchers recorded a group of wild bottlenose dolphins, capturing each animal's signature sound.
They then played these calls back using underwater speakers.
"We played signature whistles of animals in the group, we also played other whistles in their repertoire and then signature whistles of different populations - animals they had never seen in their lives," explained Dr Janik.
The researchers found that individuals only responded to their own calls, by sounding their whistle back.
The team believes the dolphins are acting like humans: when they hear their name, they answer.
Dr Janik said this skill probably came about to help the animals to stick together in a group in their vast underwater habitat.
He said: "Most of the time they can't see each other, they can't use smell underwater, which is a very important sense in mammals for recognition, and they also don't tend to hang out in one spot, so they don't have nests or burrows that they return to."
The researchers believe this is the first time this has been seen in an animal, although other studies have suggested some species of parrot may use sounds to label others in their group.
Dr Janik said that understanding how this skill evolved in parallel in very different groups of animals could tell us more about how communication developed in humans.
at July 23, 2013