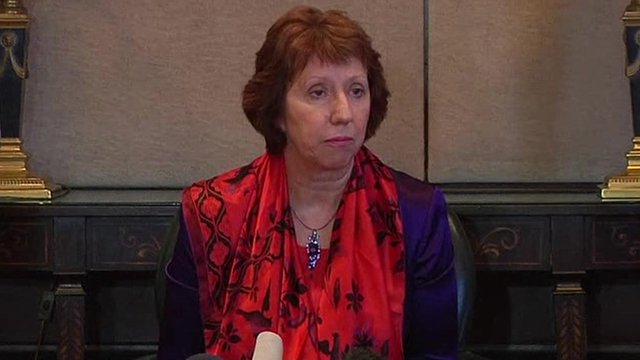 Catherine Ashton: "He [Morsi] has access to information in terms of TV and newspapers"
Continue reading the main story

EU's Foreign Policy Chief Catherine Ashton says Egypt's ousted President Mohammed Morsi is "well", but that she does not know where he is being held.
Baroness Ashton had two hours of "in-depth" discussions with Mr Morsi on Monday, but declined to give details of what he had told her, insisting: "I'm not going to put words in his mouth."
She said Mr Morsi had access to TV and newspapers and followed developments.
Mr Morsi has been detained since he was overthrown by the military on 3 July.
Baroness Ashton's second visit to Egypt in 12 days comes after more than 70 Morsi supporters were killed in clashes with security forces on Saturday.
The ousted leader's allies have said they are planning a major protest in Cairo on Tuesday, and the interim government has warned that any violation of the law will be dealt with "firmly".
Security officials have also threatened to dismantle the main protest sit-in at a square near the Rabaa al-Adawiya mosque in the capital's north-east, where Saturday's deadly clashes erupted.
Helicopter
Baroness Ashton's spokeswoman Maja Kocijancic announced early on Tuesday that the EU's high representative for foreign affairs had become the first outside official to meet Mr Morsi since he was deposed.
She had asked to see him earlier this month during her first visit to Cairo in the present crisis, but it did not happen.
Continue reading the main story 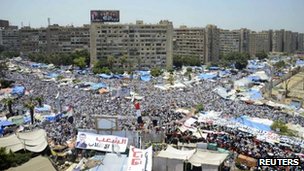 Some reports said that she was taken to the meeting on Monday night by military helicopter, suggesting that Mr Morsi may be being held somewhere outside the capital.
At a news conference on Tuesday, Baroness Ashton described their discussions as "friendly, open and frank".
"We talked for two hours. We talked in depth," she said. "I also told him… that I was not going to represent his views, because in the circumstances he cannot correct me."
"He has access to information in terms of TV and newspapers, so we were able to talk about the situation. And we able to talk about the need to move forward."
Asked where Mr Morsi was being detained, Baroness Ashton said: "I don't know where he is, but I saw the facilities he has."
"I've tried to make sure that his family know he is well."
Baroness Ashton said she had met both sides and told them the EU wanted to "help the people of Egypt determine their own future".
"This great country has to move forward, and has to do so in an inclusive way," she added. "We need to find a calm solution to the situation."
The BBC's Jim Muir in Cairo says people will want to know if Baroness Ashton's meeting with Mr Morsi revealed any flexibility that might create some common ground to explore, in search of a way out of this explosive crisis. 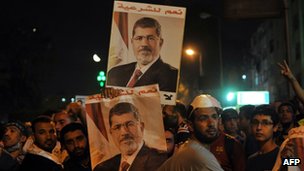 The Muslim Brotherhood and its allies say Mohammed Morsi must be reinstated
But on the face of it, there is little room for manoeuvre, our correspondent adds.
The Brotherhood and its allies in the Anti-Coup National Alliance insist that Mr Morsi must be restored to the presidency, and that they will continue their protests until that happens.
"It's very simple. We are not going anywhere," Brotherhood spokesman Gehad al-Haddad told the Reuters news agency.
The interim presidency has said clearly that there will be no deviation from the transition plan. A spokesman stressed: "The ship has sailed and we have no way but to go forward."
Baroness Ashton also met the head of Egypt's armed forces, Gen Abdul Fattah al-Sisi, and government ministers on Monday.
Egypt's interim Vice-President, Mohamed ElBaradei, told Baroness Ashton that the government was doing all it could "to reach a peaceful exit to the current crisis", according to Ahram Online.
He also reportedly stressed that any solution would have to be in accordance with the law and not pose a threat to national security.
A US state department spokeswoman said Secretary of State John Kerry had told Baroness Ashton by telephone that he fully supported and appreciated "her efforts to calm tensions, prevent further violence, bridge political divides, and help lay the basis for a peaceful, inclusive process". 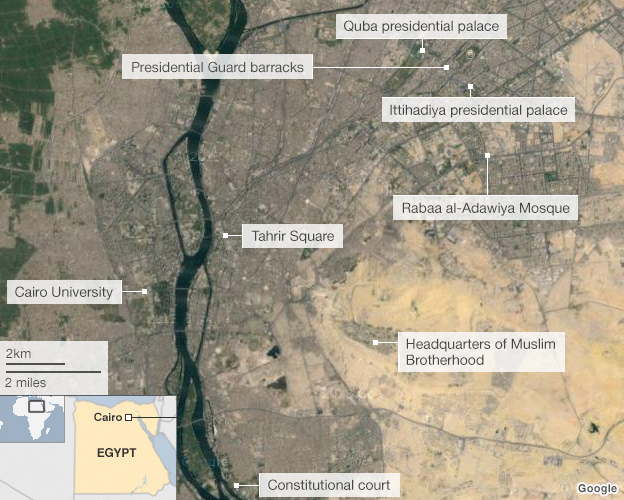