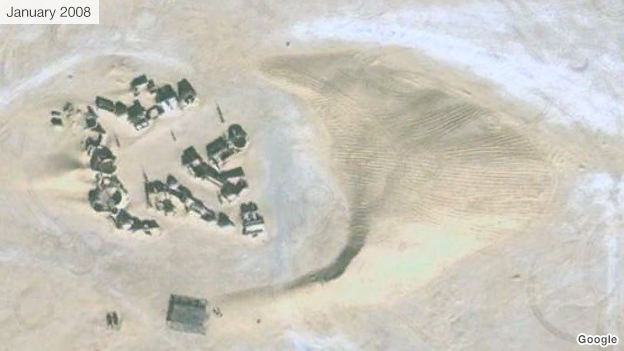 Sand dunes migrating over the Tunisian desert are poised to bury a famous Star Wars film set.
The buildings of the fictional city Mos Espa featured in The Phantom Menace, "Episode I" of the Jedi saga.
Sited on the planet Tatooine, this was the home of the young Anakin Skywalker, later to become Darth Vader.
Scientists have used the dwellings as a fixed geographic reference to measure the migration of giant wind-blown crescent-shaped dunes, or barchans.
Homes are rarely built in dune fields, and this study illustrates why. It shows dune movements on Earth are 10 times faster than barchans on Mars.
Wind-blown sand can build huge mounds in arid deserts, with sand grains pushed up the shallow rear slope before falling down the steep front slope in the lee of the wind. With steady prevailing winds, the dune shape reflects the wind direction and can develop crescent "wings" pointing downwind.
Individual crescent-shaped barchans are seen on other planets as well as on Earth, and have been imaged on the surface of Mars as well as on Titan, the largest moon of Saturn. 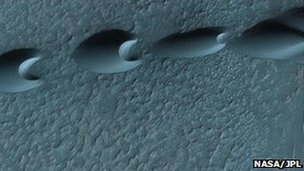 Crescent-shaped dunes glide across the face of many planets, from Mars to Tatooine
Ralph Lorenz, from Johns Hopkins University, US, together with Jason Barnes, of Brigham Young University, and Nabil Gasmi, of the University of Sousse, Tunisia, visited the Mos Espa site in 2009, and noted that part of a nearby set used in Star Wars Episode IV: A New Hope had already been overrun.
Using satellite images of the site, they were able to determine the speed of dune movement, which is approaching the buildings once inhabited by such luminaries as Anakin, his slave owner Watto, and rival podracer Sebulba.
Moving at around 15m a year, the front edge of the barchan appears to have made contact with some of the Mos Espa buildings earlier this year, and is encroaching on Qui-Gon's Alley.
The barchan will likely continue on its journey past the city site, which in due course will re-emerge from the sand, but it is anticipated that it will not remain unscathed.
at July 19, 2013