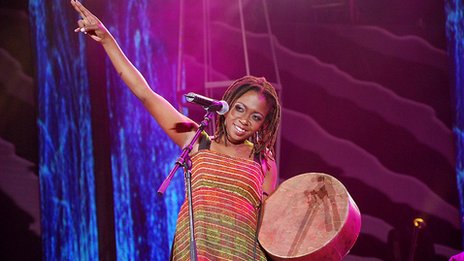 Chiwoniso was the daughter of famous musician Dumisani Maraire

Chiwoniso's album Ancient Voices made her a star of the World Music scene in the 1990s.

She played the mbira, or thumb piano, which only men were traditionally supposed to play in Zimbabwe.

She died of suspected pneumonia, just a year after the death of her ex-husband, Andy Brown, also a prominent musician. The pair leave two children.


Chiwoniso was the daughter of renowned Zimbabwean mbira player Dumisani Maraire, who taught at the University of Zimbabwe.

The BBC's Brian Hungwe in the capital, Harare, says Zimbabweans are shocked at the news of her death.

She not only broke a taboo by playing the mbira, she also successfully fused the traditional sound with modern instruments.

She was born in the US in 1976, before moving back to Zimbabwe at the age of seven.

"She has been in hospital for the past 10 days suffering from chest pains," her manager, Cosmas Zamangwe, told Zimbabwe's state-owned Herald newspaper.

"We are however still to ascertain the disease she was suffering from but we suspect it is pneumonia."

I knew Chiwoniso since she was a young girl in the late 1980s. She became part of my extended family when she married my nephew, musician Andy Brown, also late. I saw her mature so fast in her music career at an early age. I will never forget our last performance together in Vilnius, Lithuania in June 2012. She improvised with mbira music accompanying me in my poetry. The last pain was when we parted. She simply said: "Uncle, when do you return? The fight is still on." All the time in her performances of music and dance, I could not help but feel her profound love for music, the people who danced to it, and her vision for our country. Very sad to lose her. Really sad! Chenjerai Hove, Stavanger, Norway

Met her a few weeks ago at a show at 7 Arts Theatre, Avondale, Harare with SA based Lira. She was still shining though. Her death came as shock to many. Great vocal prowess. Will really miss her inspiring songs. RIP beloved sis. Blessing, Harare, Zimbabwe

She was a very talented and popular musician. I enjoyed her concerts in Harare. She will be missed. Gretchen Cowman, Nairobi, Kenya

She was amazing especially on songs like 'Ivai Nesu', 'Wandirasa' and 'Ancient Voices'. I also loved 'Amai Famba Zvakanaka'. I met her one Saturday afternoon in Harare and asked to have a picture with her from my phone. She refused. I probably looked like a nosy journalist in my church suit! Talent, Stoke-on-Trent, England

Very sorry for such a loss at such a tender age. As a Zimbabwean bringing up my little children who so much love music, I can feel the loss our country has suffered. Chiwoniso could have inspired my British born children that it is possible to play African rhythms and internationalise it to add variety in the world of entertainment. Ryton Dzimiri, Swansea, England
at July 25, 2013