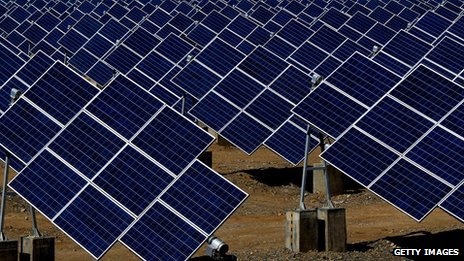 The European Commission says it has reached "an amicable solution" with Beijing in a row over imports of Chinese solar panels.
Both sides have agreed a minimum price for the panels, EU Trade Commissioner Karel De Gucht said.
The dispute erupted after the Commission - the EU's executive arm - imposed temporary anti-dumping levies on the imports.
It argued that Chinese firms were undercutting rivals.
China is the world's largest producer of solar panels. Its exports to Europe totalled 21bn euros ($27bn; £18bn) in 2011.
"After weeks of intensive talks, I can announce that I am satisfied with the offer of a price undertaking submitted by China's solar panel exporters," Mr De Gucht said on Saturday.
"This is the amicable solution that both the EU and China were looking for."
He added that the agreement would "lead to a new market equilibrium at sustainable prices".
The anti-dumping case was the biggest ever undertaken by the Commission.
In June, the EU accused China of "dumping" solar panels in Europe - selling them at below cost to steal market share - and then said it would impose import tariffs of up to 47.6% on them.
China said EU farm subsidies had resulted in European countries "dumping" wine on China, and warned it may respond in kind.
at July 27, 2013