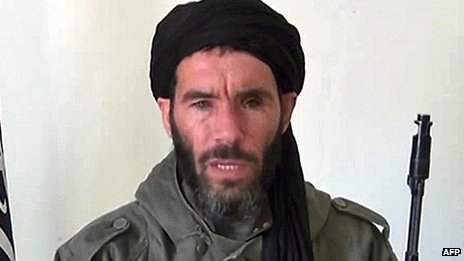 US prosecutors have charged militant Islamist leader Mokhtar Belmokhtar over a deadly siege at an Algerian gas plant in January.
He faces charges including hostage-taking, kidnapping and conspiring to use a weapon of mass destruction.
Belmokhtar remains at large and the US is offering a $5m (£3.2m) reward for information leading to his arrest.
Three US citizens were among at least 37 hostages killed when Algerian troops stormed the Tigantourine plant.
Days earlier, gunmen had seized local and foreign workers at the complex.
"Belmokhtar brought terror and blood to these innocent people and now we intend to bring Belmokhtar to justice," said Preet Bharara, US attorney for the Southern District of New York, in a statement.

The charges unveiled on Friday said Belmokhtar had appeared in an online video the day after the siege ended, claiming he had carried out the attack on behalf of al-Qaeda.
George Venizelos, head of the FBI's New York office, said the charges "describe a fanatical jihadist leading an extremist vanguard of an extremist ideology''.
Belmokhtar is a former leading figure in al-Qaeda in the Islamic Maghreb (AQIM) but is now believed to head a group of militants known variously as the Signed-in-Blood Battalion, the Masked Men Brigade and the Khaled Abu al-Abbas Brigade.
He was designated a foreign terrorist by the US Treasury Department in 2003.
The hostage crisis began on 16 January when militants attacked two buses carrying foreign workers from the Tigantourine gas facility near In Amenas in eastern Algeria.
The militants took foreign workers hostage at the gas complex, which was quickly surrounded by the Algerian army. Special forces stormed the living area on 19 January and the gas treatment plant two days later.
At least 29 militants also died in the shoot-out.
at July 19, 2013