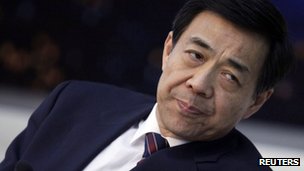 Mr Bo was removed from his post in March 2012

Bo Xilai, formerly the Communist Party chief of Chongqing, was expelled from the party after a scandal surrounding the murder of a British businessman.

His wife Gu Kailai was jailed in August for the killing of the Briton, Neil Heywood.

Mr Bo was charged by prosecutors on Thursday in Jinan in Shandong province, state media said.

The Bo Xilai scandal, which exposed corruption claims and infighting at the top of the Communist Party, was one of the biggest to rock China in years.

He is also charged with embezzling public money, Xinhua said.
Murder investigation
The sending of the formal indictment to a court in the city of Jinan suggests the trial is now imminent, the BBC's John Sudworth in Shanghai reports.

However, no trial date has been announced yet. 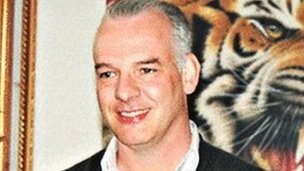 It is common for high-profile political trials to take place in provinces away from where the accused is based, as they are considered more likely to gain beneficial treatment in their home province.

Mr Bo was previously considered a rising star in the Communist Party, and one of the country's most powerful officials.

However, he came under criticism after his former police chief, Wang Lijun, fled to the US consulate in Chengdu in February 2012, spending a day there.

Wang made allegations about British businessman Neil Heywood's death while at the consulate, reports said.

Heywood had died in Chongqing the previous year. The Wang Lijun incident prompted an investigation into his death.

John Sudworth BBC News, Shanghai
So the stage has been set for the trial of a man who was once one of China's most powerful and - rare in the grey-suited world of Communist Party politics - charismatic politicians.
Of course, some have suggested that it was that charisma, coupled with the unique brand of populist politics he practised in Chongqing, that may have earned him powerful enemies all too willing to hasten his demise.
Having been stripped of his party positions more than a year ago, it has since been a question of not if, but when Bo Xilai will be convicted, as per the norms of Communist Party justice.
The publishing of the indictment means that the trial is now imminent and the country's new leaders have judged the timing to be right for such a politically sensitive trial, perhaps wanting to get it out of the way ahead of the big economic planning meeting in the autumn.
But it is still risky. Mr Bo's fall has highlighted cracks in the Communist Party edifice. A commentary published by a state-run news agency warns against resistance to the decision, calling on local governments to "defend the authority" of the Beijing leadership.

Mr Bo was suspected of trying to cover up the murder, and was stripped of his party positions.

Mr Bo's wife Gu Kailai was charged with Heywood's murder, and given a suspended death sentence, which is usually commuted to life imprisonment in China.

Wang, meanwhile, was jailed for 15 years for defection, power abuse and bribe taking.
Populist policies
Mr Bo was popular in his role as party chief in Chongqing.

He was known for two high-profile campaigns: a large-scale crackdown on crime, and a drive to promote China's old communist values.

Despite his charisma, his penchant for the limelight set him apart from other Chinese politicians.

According to analysts, his ambition and flamboyant style earned him enemies and was considered controversial by party leaders.

His populist brand of Maoist nostalgia, such as his encouragement of the public singing of old communist songs, was seen as dangerous by China's more reform-minded leaders, our correspondent says.

On China's microblogs, many users expressed support for the indictment against Mr Bo.

"The handling of Bo Xilai's serious disciplinary violations has again proved the party's 'zero tolerance' attitude to corruption," a user by the name of God's Drop Shadow wrote on Sina Weibo, a Chinese Twitter-like site.

"I support President Xi's efforts to fight the tigers when it comes to corruption, and clear corrupt elements for the good of the country and the people," user qixiya0 said.

Xi Jinping had previously used the terms "tigers" and "flies" to describe corrupt officials at all levels.

However, evidence of Mr Bo's popularity could still be found online.

"I don't really understand politics, but from when I first knew of Bo Xilai, my impression of him has been of a leader who would teach young people, just like an elder. Despite what has happened, in my heart he will still be like that," Sina Weibo user Small Ears are the Two Large Flowers in Legends wrote.
at July 25, 2013