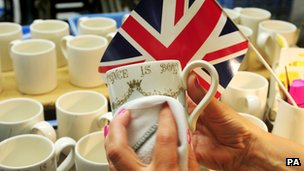 Not a St George's Cross in sight
Some US television networks proclaimed the royal baby news by welcoming the arrival of the "future king of England", forgetting about the rest of the UK.
Scots, Welsh and Northern Irish... you may want to look away now. Some of the biggest names in American broadcasting have overlooked your existence amid the hysteria surrounding the newborn Windsor. Star presenters on CBS News and ABC News were among the culprits who referred to the baby as "the future king of England". American talk show host Ellen DeGeneres tweeted: "It's a boy! So happy for my cousin Kate and the future King of England".
But there hasn't been a King of England since William III in the early 18th Century - and there won't be again, unless (or until) the United Kingdom splinters completely.
Continue reading the main story

"The structure of the English monarchy changed... when Wales was incorporated by the Act of Union of 1536. It changed once more in 1707 when Scotland was brought in to constitute the Kingdom of Great Britain.
"The Act of Union with Ireland in 1801 necessitated another change of name to the United Kingdom of Great Britain and Ireland, which lasted until Southern Ireland was declared a Free State in 1921."
The Kings and Queens of Britain, by John Cannon and Anne Hargreaves
It's a common misunderstanding in the US. The New York Times angered many Scots when it marked Andy Murray's Wimbledon triumph with a tweet that said: "After 77 years, Murray and England rule"
But before Brits get too sniffy about this equation between Britain and England, we should acknowledge it's a pretty complicated business and the English are sometimes guilty of the same mistake. A common error is for the British themselves to forget about Northern Ireland by referring to "Great Britain", which is an island, when really they mean the United Kingdom. (The Northern Irish are "British" without being part of Great Britain.)
And remember that the Isle of Man and the Channel Islands are British, but not part of the UK.
Head hurting yet? 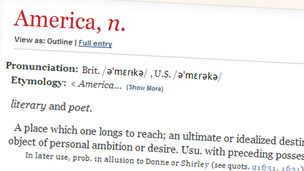 America is a desire, says the OED
This is a two-way street, and getting to grips with the correct terminology stateside is also a tricky business. The United States of America is often referred to as "America" by British people, but consult the Oxford English Dictionary and you'll see that America is a desire, a place you yearn for. Of course, Simon and Garfunkel fans knew that already.
The distinction between America and the US is important, because there is another America, Latin America. Not to mention Central America, and the rest of North America (including Mexico and Canada).
So can we legitimately use "American" as an adjective referring to something from the US? If so, you're back in the Britain/British quagmire again. Perhaps the answer is for everyone to be tolerant, to embrace a bit of "constructive ambiguity"... and just toast the health of the future king.
at July 23, 2013