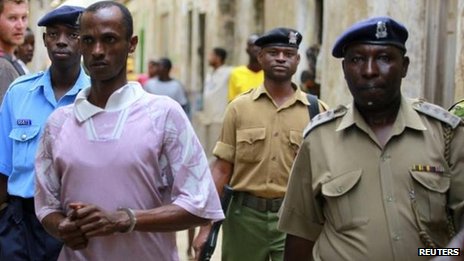 A Kenyan court has sentenced a former hotel worker to death after convicting him of being in a gang which murdered a British tourist and abducted his wife.
Judith Tebbutt, of Hertfordshire, was held for six months in Somalia after pirates shot her husband David in 2011.
The Met Police, which helped the Kenyan probe, said Ali Babitu Kololo, 27, was found guilty of robbery with violence.
Kenya has not carried out a death sentence since 1987, and Kololo is expected to serve a prison sentence.
He had been sacked from his job at the resort several months before he guided the kidnappers to the Tebbutts' villa at the remote resort on an island in Kenya's Lamu archipelago.
He pleaded not guilty at his trial held in the town of Lamu, and said he had been acting under duress.
The Met Police said a small team of counter-terrorism officers travelled to Kenya shortly after the murder and kidnap to support the local police investigation.
The investigation matched footprints found on the beach to the shoes worn by Kololo when he was arrested shortly after the incident.
The Foreign Office confirmed the death penalty had been imposed, but said it was not expected to be carried out because of a moratorium in place since 1987.
A spokesman said: "We welcome efforts by the Kenyan authorities to bring those responsible for the kidnap of Judith Tebbutt and the murder of her husband, David, to justice. 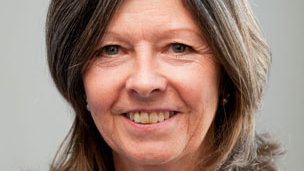 Judith Tebbutt was held for more than six months in Somalia
"Today's news that Ali Babitu Kololo has been found guilty of robbery with violence is a positive development, but the wider Kenya investigations continue."
Writing on Twitter, the UK ambassador to Somalia, Neil Wigan, said: "Welcome conviction in Lamu today of Kololo for his role in Tebbutt kidnap and murder."
The Tebbutts, from Bishop's Stortford, travelled to the resort, close to the Somalia border, after visiting the Masai Mara game reserve.
In an interview with the BBC last week, Mrs Tebbutt, 58, said she felt uncomfortable after arriving at the beach resort for a two-week stay as she and her publisher husband were the only guests.
She was awoken by the sounds of her husband struggling with someone in the dark. Then she was jabbed with the barrel of a rifle and dragged down to the beach.
She revealed after her release she remained unaware that the gang had killed her husband for two weeks after she was kidnapped.
Her release came after her family reportedly paid a ransom.
at July 30, 2013