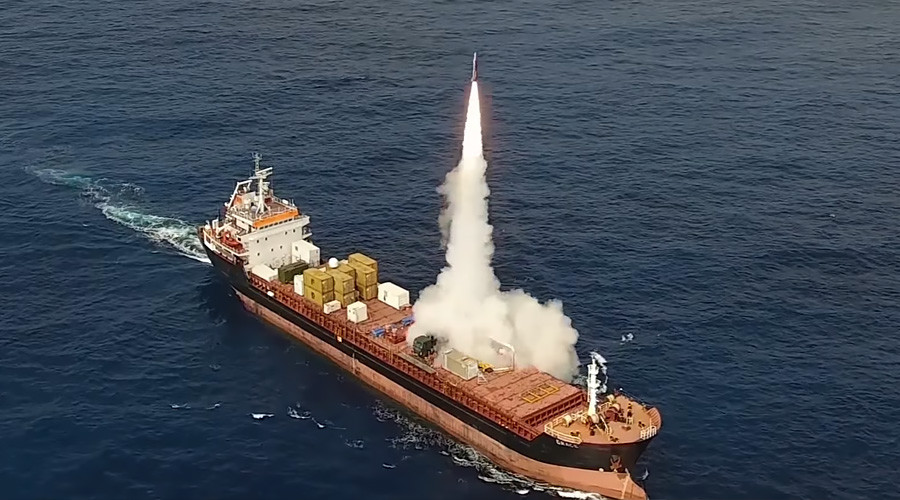 © armyreco / YouTube
An Israeli defense contractor has successfully test-fired a missile with a 400-kilometer range that can fit into a standard shipping container. Launched from a ship, it joins the trend of weaponizing civilian freighters.
The missile that was fired on Tuesday, dubbed LORA or Long-Range Artillery weapon system, is produced by state-owned defense giant Israel Aerospace Industries (IAI). According to company specifications, the solid-propellant ground-to-ground 1,600-kilogram projectile has a range of 400 kilometers and can be fired at a target in just 10 minutes.
First revealed in 2006, the missiles were originally designed to be secretly deployed. To protect them from detection, the missiles are stored in dedicated sealed canisters that can fit inside a standard shipping container and have a shelf life of seven years without maintenance.
From the start, IAI saw LORA as both land-based and ship-based system. This week, a missile fired from a ground launcher placed on a freighter vessel out at sea successfully hit its intended target on land.
“This was one of the most complex trials we held over the past few years and a technological breakthrough for IAI’s missile development operations,” said Executive Vice President Boaz Levi, according to an IAI statement.
“The trial was held according to a full operational outline, including an assessment of the system’s maneuvering, assault, and precision capabilities. The impressive results attest to the system’s maturity and advanced capabilities,” he said.
In theory, a complete containerized version of LORA would not need a dedicated launcher system. Rather a standard container would house four missiles and everything needed to fire them. A command and fire control section inside another container would be enough to serve up to four launchers.
The new technology could potentially turn any civilian freighter ship into a naval missile platform, a consideration that raises concerns about potential sneak attacks. Standardization would also make deploying such missiles on dedicated warships more flexible.
Russia has a similar system, a version of its Kalibr cruise missiles called Club-K, which was unveiled in 2011. Artist concepts show the Russian Navy’s upcoming Arctic patrol boat with two containerized Kalibr launchers on its stern.
at June 24, 2017