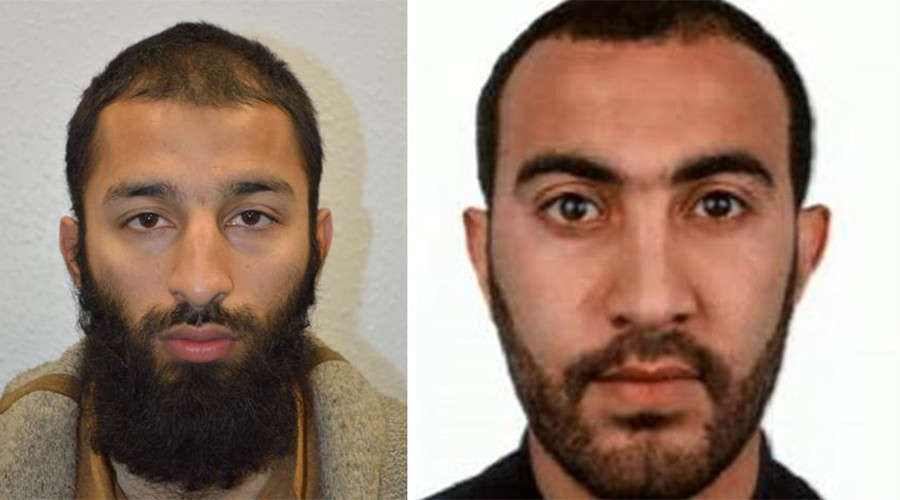 Khuram Shazad Butt (left) and Rachid Redouane (right) @metpoliceuk / Twitter
Metropolitan Police have named Khuram Shazad Butt and Rachid Redouane as two of the three attackers shot dead by officers during the terrorist assault on London Bridge and Borough Market on Saturday.
TrendsLondon Bridge attack
Both men were from Barking, east London, and are believed to have carried out the attacks, although “formal identification has yet to take place,” a police statement said.
Butt, 27, was a British citizen who was born in Pakistan. Redouane, 30, also known as Rachid Elkhdar, had claimed to be both Moroccan and Libyan, according to police.
Inquiries are still ongoing to identify the name of the third attacker.
"I would urge anyone with information about these men, their movements in the days and hours before the attack and the places they frequented to come forward," Assistant Commissioner Mark Rowley said.
Read more

‘Stabbed 15 times as she begged for help’: How London Bridge attack unfolded
Butt was known to police and domestic intelligence agency MI5, although Redouane was not known to law enforcement.
“However, there was no intelligence to suggest that this attack was being planned,” the statement said.
The statement went on to note that counterterrorism police are currently overseeing 500 terrorism investigations, involving 3,000 'subjects of interest' and around 20,000 former subjects of interest “whose risk remains subject to review.”“A small number of the highest priority investigations involve current attack planning, and these investigations command a significant proportion of our resource,” the statement read.
Counterterrorism services and police have foiled 18 plots since 2013, including five since the Westminster attack on March 22, according to Rowley.
READ MORE: Relatives issue desperate pleas for those still missing after London terrorist attack
All three men were shot dead by armed officers within eight minutes of their attack, which began by ramming pedestrians on London Bridge on Saturday night. The attackers then continued on foot to Stoney Street, stabbing several people along the way.
Seven people died and 48 were injured in the third terrorist attack to hit Britain in as many months. Investigators are still working to contact the next of kin for some victims who are believed to be from outside the UK.
at June 05, 2017