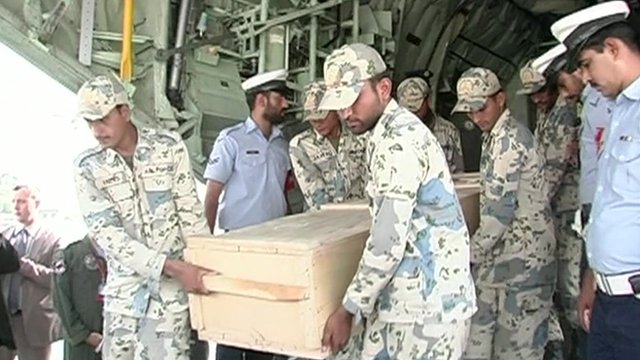 The Taliban have said that the 10 climbers shot dead in northern Pakistan were killed by a branch of the militant group set up to target foreigners.
They were forced to kneel and shot in the head, officials said, as more details emerged about Saturday's deadly assault at Nanga Parbat base camp.
Pakistan's cabinet met to discuss the attack and its impact on the country's already troubled tourist industry.
Climbers in the area of the world's ninth highest peak have been evacuated.
The Pakistani Taliban said that the new faction - named in local media reports as Junoodul Hifsa - was set up to take revenge for drone attacks in Pakistan.
The Taliban had earlier said that the attack was in retaliation for the killing of their second-in-command, Waliur Rehman, who died in a suspected US drone strike in May.
Rounded up
The nationalities of the foreign victims have now been identified as American, Chinese, Ukrainian, Slovakian, Lithuanian and Nepali. One Pakistani also died.
The BBC's Orla Guerin in Islamabad says the carefully choreographed assault was the worst attack on foreigners in Pakistan in a decade.
Survivors have yet to speak publicly about the attack but more details about their ordeal have emerged from local reports and from officials. 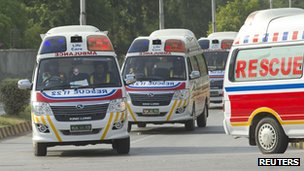 Police and army vehicles escorted the ambulances transporting the victims' bodies
At least 15 gunmen dressed in the uniform of local security forces carried out the attack. Even though it took place at base camp, this was at a height of 4,200m (13,779 ft) and the attackers would have had to travel for at least 18 hours by foot or by mule, correspondents.
The attackers forced two local guides to take them to the base camp. Once they reached their destination, they rounded up the foreign climbers and staff, took passports and money, destroyed mobile phones, blindfolded them and forced them to kneel.
The gunmen separated and tied up the local Pakistani staff and told them not to attempt to raise the alarm until morning, a local official said. The attackers are believed to have left in the early hours of Sunday. It is thought that they had about six hours to make their escape.
The BBC has also been given an account by a climbing guide who was on the mountain approaching base camp on Saturday night when bursts of gunfire were heard.
The guide was warned to take cover by locals and stayed hidden on the mountain until the next morning when a Pakistani cook came rushing down in tears saying everybody had been killed.
A Chinese tourist is also known to have survived the attack, after apparently escaping from his captors.
Blow to tourism
The BBC's Orla Guerin in Islamabad says that it is clear this could not have been done without very careful planning.
Such organisation is consistent with the brazen assaults carried out by the Pakistani Taliban in the past on high security targets, our correspondent adds.
The authorities have held 36 people in connection with the attack, but they have admitted that they do not have the ringleader. Our correspondent says that people in the area have no confidence the authorities will find those responsible.
Part of the Himalayan Range, Nanga Parbat, which is 8,126m (26,660ft) above sea level, is popular with trekkers and mountaineers, especially during June and July.
The Gilgit-Baltistan region, where it is located, is famous for its natural beauty.
The attack is likely to hurt the finances of the cash-strapped Gilgit-Baltistan government which depends heavily on revenue raised from mountain expeditions.
Expeditions to Nanga Parbat have been halted, our correspondent says.
Sources have told the BBC that climbing will soon be suspended on other mountains, including K2, the world's second highest peak.
Although this is the first such attack on tourists in the region, it is being seen as a significant blow for the already struggling tourist industry in Pakistan which has suffered years of militancy.
Some 36 people have been arrested, but the authorities admit they have not captured the ringleaders of the attack. One of those in custody is a Pakistani guide who was apparently forced to lead the gunmen to their targets.