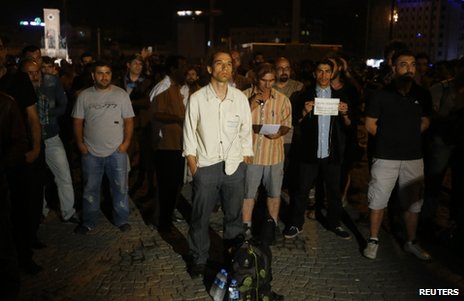 A Turkish protester dubbed the "standing man" has led a vigil on Istanbul's Taksim Square days after the authorities evicted demonstrators.
Performance artist Erdem Gunduz stood silently for eight hours, facing a portrait of Kemal Ataturk, the founder of modern, secular Turkey.
Hundreds of others joined him in the square, which was reopened on Monday, before being dispersed by police.
Mr Gunduz later told the BBC he had wanted to take a symbolic stand.
Two leading trade unions held rallies and a one-day strike in defiance of Prime Minister Recep Tayyip Erdogan on Monday.
Mr Gunduz appeared in the square at around 18:00 (15:00 GMT) on Monday and remained there until 02:00 when police moved in.
Ten people who refused to be moved on were detained.
"There are many, many young people on the streets," Mr Gunduz told the BBC.
"I'm nothing... The idea is important: why people resist the government. The government doesn't want to understand, didn't try to understand why people are on the streets. This is really silent resistance. I hope people stop and think 'what happened there?'"
His protest quickly captured the imagination of the protest movement. The hash tag "duranadam" ("standing man") dominated Turkish-language Twitter on Tuesday morning.
Mr Gunduz's protest contrasts sharply with the violent clashes of recent weeks, in which some 5,000 people have been injured and at least four have died.
The protests began on 28 May against a plan to redevelop Istanbul's Gezi Park, on the city's central Taksim Square, but it snowballed into nationwide anti-government protests after the perceived high-handed response of the authorities under their three-term prime minister, Mr Erdogan. 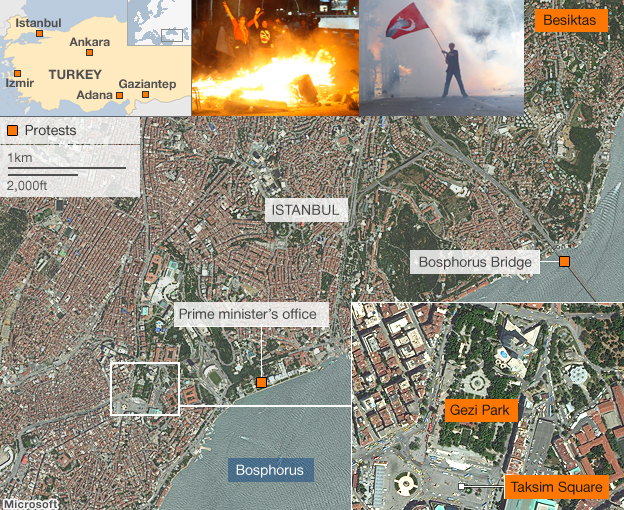 Oh my goodness! Incredible article dude! Thanks, However I am going through issues with your RSS.
I don't know the reason why I cannot join it. Is there anybody else having identical RSS problems? Anyone that knows the answer can you kindly respond? Thanks!!

Perineoplasty (or Perineorrhaphy) has an objective
of making this area look normal by cutting out excess
skin and flaccid skin tags. The good news is that normally they are benign tumors that won't affect your health. The brown-slatted background in the image above really isn't part
of the technique I was trying to demonstrate here.