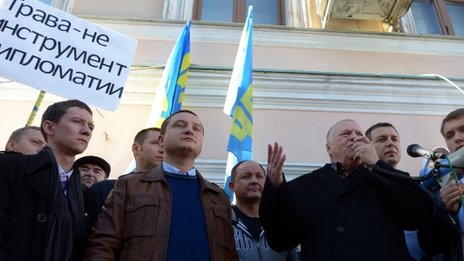 A senior diplomat at the Dutch embassy in Moscow has been beaten up in his flat, days after a spat involving a Russian official in The Hague.
The diplomat, named by Russian media as Onno Elderenbosch, was reportedly tied up by men posing as electricians.
Dutch Foreign Minister Frans Timmermans said the diplomat had been lightly wounded. He added that he had summoned the Russian ambassador.
Mr Timmermans apologised last week after a Russian diplomat was arrested.
Dmitri Borodin was held for several hours on suspicion of mistreating his two young children, prompting President Vladimir Putin to demand the Dutch apology.
Protests were held outside the Dutch embassy in response to the arrest.
After an investigation, the Dutch foreign minister conceded that police had breached the rules on diplomatic immunity.
Writing on his Facebook page late on Tuesday, Mr Timmermans said the Dutch diplomat, whom he did not name, had been mistreated by two intruders.
"Our people must be able to work there safely and I want the assurance that the Russian authorities also take their responsibility on that point," he said.
'Lipstick'

According to Russian TV, Moscow police confirmed that the deputy head of the Dutch embassy had been attacked.
When Mr Elderenbosch, 66, had returned home he found the lift was not working and two men in uniform were inspecting the fuse box, the report said. When he opened his door, he was then attacked.
The motive for the attack is not clear.
Russian reports said that Mr Elderenbosch was tied up and beaten, and that the attackers daubed a heart on a mirror in lipstick with the letters LGBT. The letters are an acronym for lesbian, gay, bisexual and transgender.
Diplomatic relations between the two countries were already strained before Mr Borodin's arrest.
The Netherlands launched legal action to free 30 people from several countries who were detained in Russia after a Dutch-flagged ship belonging to environmental group Greenpeace, the Arctic Sunrise, was boarded over a protest on a Russian oil rig in the Arctic.
The activists and journalists on board have been charged with piracy.
at October 16, 2013