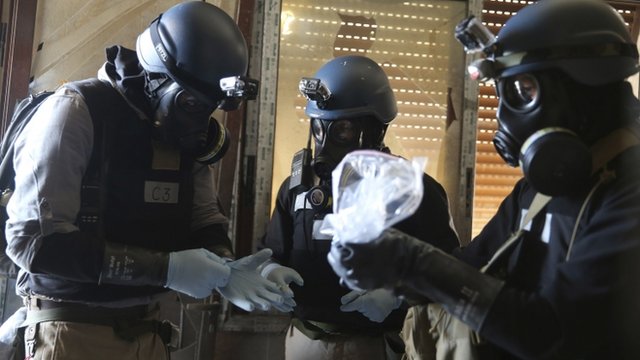 Jerry Smith, OPCW: "We have... observed all of the destruction activities"
Continue reading the main story

Syria's declared equipment for producing, mixing and filling chemical weapons has been destroyed, the international watchdog says.
This comes a day before the deadline set by the Organisation for the Prohibition of Chemical Weapons (OPCW).
The weapons have been placed under seal, an OPCW spokesman said.
Inspectors were sent to Syria following allegations, denied by the government, that its forces had used chemical weapons in civilian areas.
Continue reading the main story

Jonathan MarcusBBC diplomatic correspondent
The achievement of this crucial initial target is an important moment for the chemical weapons destruction effort in Syria.
The inspectors' first task was to move swiftly to prevent the government from producing any more chemical agent and to destroy facilities and equipment used for mixing agents and filling munitions.
Production facilities will be closely monitored to ensure that there are no moves to repair them. The next deadline is mid-November, by which time the OPCW and the Syrians must agree a detailed plan to destroy Syria's chemical weapons stockpile.
All sorts of questions are raised. Where will this destruction be carried out ? Who will provide the necessary equipment and so on?
Western intelligence agencies will be studying Syria's declarations carefully. They will be eager to direct inspectors to additional locations if there are any grounds to believe that Damascus has been less than frank in its disclosures.
The inspections were agreed between Russia and the US after Washington threatened to use force in Syria.
Syria's Deputy Foreign Minister Faisal Mekdad told the BBC's Lyse Doucet that it had not been difficult for Syria's government to meet its obligations, as some had initially feared.
"I hope those who have always thought of us negatively will change their minds and understand that Syria was, is, and will be always a constructive partner," Mr Mekdad told our correspondent.
Now that the equipment has been put beyond use, Syria has until mid-2014 to destroy the chemical weapons themselves.
In Washington, US state department official Thomas Countryman said: "I am increasingly confident that we will be able to complete this task... within the target date of 30 June of next year".
Mr Countryman, the assistant secretary for international security and non-proliferation, told US lawmakers that "our target dates are ambitious but they are achievable".
Syria's arsenal is believed to include more than 1,000 tonnes of the nerve gas sarin, the blister agent sulphur mustard and other banned chemicals, stored at dozens of sites.
In a separate development, a large explosion at a Syrian army base has been reported outside the coastal city of Latakia.
A White House official said Israeli warplanes carried out the attack overnight, but he provided no details, the Associated Press news agency reports.Continued
at October 31, 2013