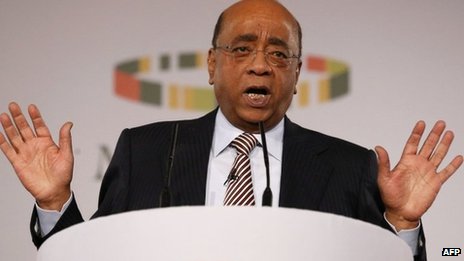 The world's most valuable individual prize - the Mo Ibrahim prize for good governance in Africa - has gone unclaimed yet again.
The $5m (£3.2m) prize is supposed to be awarded each year to an elected leader who governed well, raised living standards and then left office.
This is the fourth time in five years there has been no winner.
A committee member said the group looked "for excellence in governance but in leadership also".
Kenya's Mwai Kibaki met at least one of the criteria, after he stepped down as president earlier this year.
However, his 2007 re-election was tarnished by disputes which turned violent, leading to the deaths of some 1,200 people.
His opponent, Raila Odinga, said the poll had been rigged in favour of Mr Kibaki, who denied any wrongdoing.
Three people have won in the seven years since the prize was launched: Cape Verde's Pedro Verona Pires; Festus Mogae from Botswana and Mozambique's Joaquim Chissano.
Sudan-born telecoms entrepreneur Mr Ibrahim launched the prize in an attempt to encourage African leaders to leave power peacefully.
The $5m prize is spread over 10 years and is followed by $200,000 a year for life.
at October 14, 2013