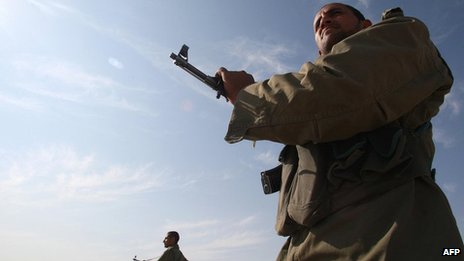 Sixteen rebels have been hanged in Iran in retaliation for the deaths of at least 14 border guards in an ambush, say Iranian news agencies.
The rebels were "linked to groups hostile to the regime", the attorney general of Sistan-Baluchistan province was quoted as saying.
They were hanged in prison in Zahedan, north-east of Saravan, where the border deaths took place overnight.
It is not clear what link, if any, those hanged had to the border attack.
One report suggests they may already have been tried and convicted, but their executions brought forward following the ambush.
Friday night's attack in a mountainous region outside Saravan, on the south-eastern border with Pakistan, was blamed by Saravan's member of parliament, Hedayatollah Mirmoradzehi, on "anti-revolution guerrillas".
But reports that a rebel group called Jeish Al-Adl had claimed responsibility for the ambush were "not confirmed", Mr Mirmoradzehi told local Tasnim news agency.
A parliamentary committee on national security will look into the attack on Sunday, meeting relevant officials, a committee member was quoted as saying.
An armed Sunni group, called Jundallah, has carried out a number of attacks against the state in recent years.

The Sunni Muslim population in Sistan-Baluchistan complains of discrimination by Iran's Shia establishment.
"Sixteen rebels linked to groups hostile to the regime were hanged this morning in the prison of Zahedan in response to the death of border guards in Saravan," Mohammad Marzieh, the provincial attorney general of Sistan-Baluchistan province, was quoted as saying by Fars news agency.
The hangings were also reported by the Iranian Students News Agency (Isna).
At least 14 guards were killed in the ambush, reports now say, though 17 were previously reported to have died. A number were also wounded, reports said.
Fars has quoted the province's deputy governor-general, Rajabali Sheikhzadeh, as saying the culprits fled to Pakistan following the border attack.
The region has experienced frequent deadly clashes in recent years.
Iran lies on a major drug trafficking route between Afghanistan and Europe.
AFP news agency quotes officials as saying more than 4,000 police officers and soldiers have been killed in the past three decades in fighting with traffickers.
at October 26, 2013