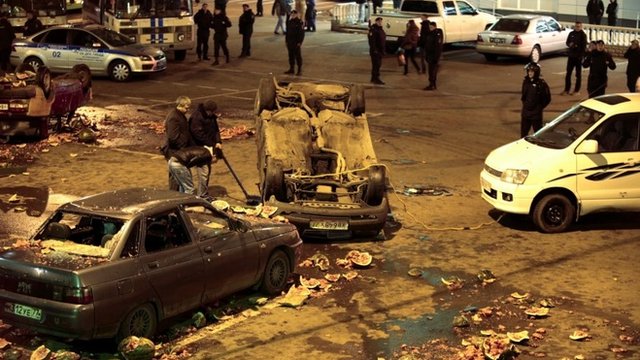 The violence was blamed on extremists, the BBC's Steve Rosenberg reports
Continue reading the main story

Police in Russia have arrested more than 1,200 people in a raid targeting migrants after major riots in Moscow.
The "preventative raid" targeted workers at a vegetable warehouse, which was attacked by demonstrators on Sunday, Russian news agencies reported.
Angry protesters overran the market searching for migrant workers.
The rioting began during a protest over the killing of an ethnic Russian man on Thursday, allegedly by a Muslim migrant from the North Caucasus.
Ethnic Russian Yegor Shcherbakov, 25, was killed in front of his girlfriend in the capital's Biryulyovo district.
Continue reading the main story

Steve RosenbergBBC News, Moscow
These figures are astonishing: more than 1,200 migrant workers detained at a wholesale vegetable market.
It shows how worried the Russian authorities are by Sunday's explosion of anger on the streets of Moscow; the police clearly want to convince Muscovites they take the grievances of local residents seriously and will crack down hard on illegal migrant workers.
Hence Monday's powerful images on Russian TV of detainees lined up against a fence with their hands tied behind their backs.
But dramatic police raids will do little to ease the tension that is growing in parts of the Russian capital between ethnic Russians, and people from the Caucasus region and some former Soviet republics.
Police have released a security camera photo of the suspect, but have not identified him.
Media said the image suggested the man was of "non-Slavic appearance", leading nationalists to conclude the killer was a Muslim migrant from the Russian North Caucasus.
Some 380 people were detained during the rioting that began on Sunday, but most have been released without charge.
It is unclear what charges, if any, those detained in Monday's raid against migrants in the vegetable warehouse would face, RIA Novosti reported. Police were quoted as saying that they were investigating "involvement in criminal activity", without elaborating.
Immigration and internal migration were among the main issues in Moscow's recent mayoral election, which was won by Sergei Sobyanin.
The BBC's Steve Rosenberg in Moscow says the violence reflects Russian nationalism, and the growing tension between ethnic Russians and migrants from the Caucasus region and from former Soviet republics. 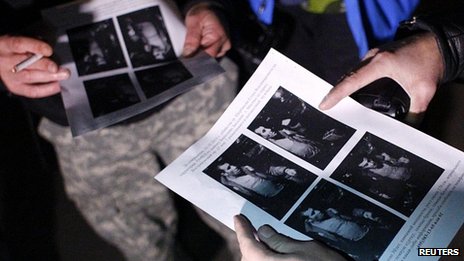 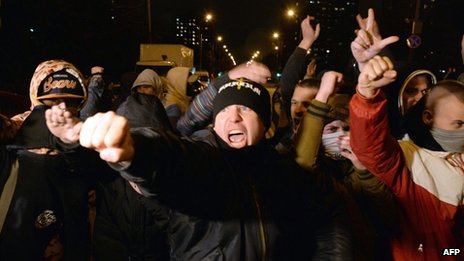 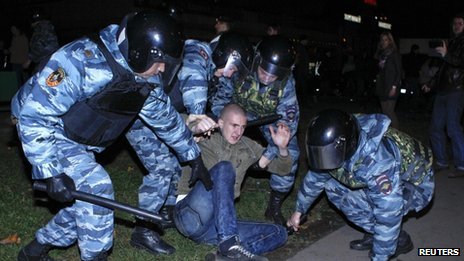 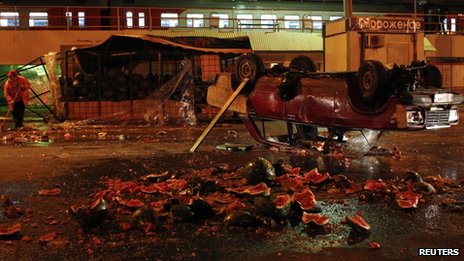 The protesters attacked a vegetable market where migrants work, leaving produce smashed in their wake
at October 14, 2013