The Talmud: Why has a Jewish law book become so popular? 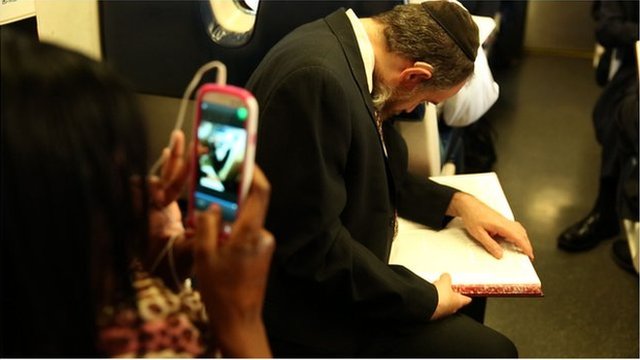 The Talmud, the book of Jewish law, is one of the most challenging religious texts in the world. But it is being read in ever larger numbers, partly thanks to digital tools that make it easier to grasp, and growing interest from women - who see no reason why men should have it to themselves.
Step into the last carriage of the 07:53 train from Inwood to Penn Station in New York and you may be in for a surprise. The commuters here are not looking at their phones or checking the value of their shares, but peering down at ancient Hebrew and Aramaic text and discussing fine points of Judaic law.
It's a study group on wheels, and the book absorbing their attention in between station announcements is the Talmud - one of the most challenging and perplexing religious texts in the world. The group started 22 years ago, to help Long Island's Jewish commuters find their way through the "book", which stretches to well over 10 million words across 38 volumes.
Continue reading the main story 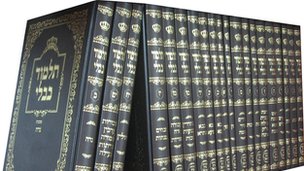 The Talmud is a two-part documentary from Radio 4 and the World Service.
When someone asked Einstein, shortly before his death, what he would do differently if he could live his life again, he replied without hesitation: "I would study the Talmud."
It contains the foundations of Halakha - the religious laws that dictate all aspects of life for observant Jews from when they wake in the morning to when they go to sleep at night. Every imaginable topic is covered, from architecture to trapping mice. To a greater extent than the other main Jewish holy book, the Torah, the Talmud is a practical book about how to live.
"The laws are very, very relevant to everyday life," says Eliezer Cohen, a real estate manager who organises the classes on the train with a couple of other amateur scholars. "Many times, I go to the office afterwards and I'll get questions on current events or in business and I'll say, 'Oh, we just learnt that today in the Talmud.' It's a blueprint for life."
But the Talmud is perhaps better described as a prompt for discussion and reflection, rather than a big book of Do's and Don'ts.
"The Talmud is really about the conversation and the conversation never ends," says Rabbi Dov Linzer, of the Yeshivat Chovevei Torah School in New York. It is a distillation not just of oral law, but also the debates and disagreements about those laws - with different rabbinic sources occupying a different space on the Talmudic page. Mixed in with it all are folk stories and jokes. 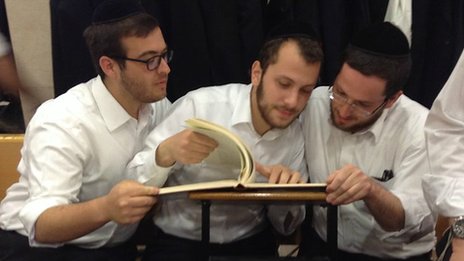 At the Mir Yeshiva in Jerusalem, scholars may spend years or decades in Talmudic study
At one time, tackling this most forbidding of texts was restricted to male scholars ready to devote themselves to prolonged study in a yeshiva or religious school. Then, in 1923, a rabbi named Meir Shapiro introduced a study regime known as daf yomi, or "page-a-day". Under the supervision of a teacher or a fellow student who has prepared in advance, students read through two facing pages of Talmud and commentary, try to work out the meaning and discuss the implications for their lives.
When the commuters of Long Island struggle over a difficult passage of Talmud, they know that tens of thousands of Jews all over the world are on the same page. And when he travels abroad, Eliezer Cohen can usually find a local group to continue his studies. On one trip to Jerusalem, he even encountered a man who, like him, taught the daily reading on his way to work (although on a bus, rather than a train).
Anatomy of a Talmudic pageContinue reading the main story 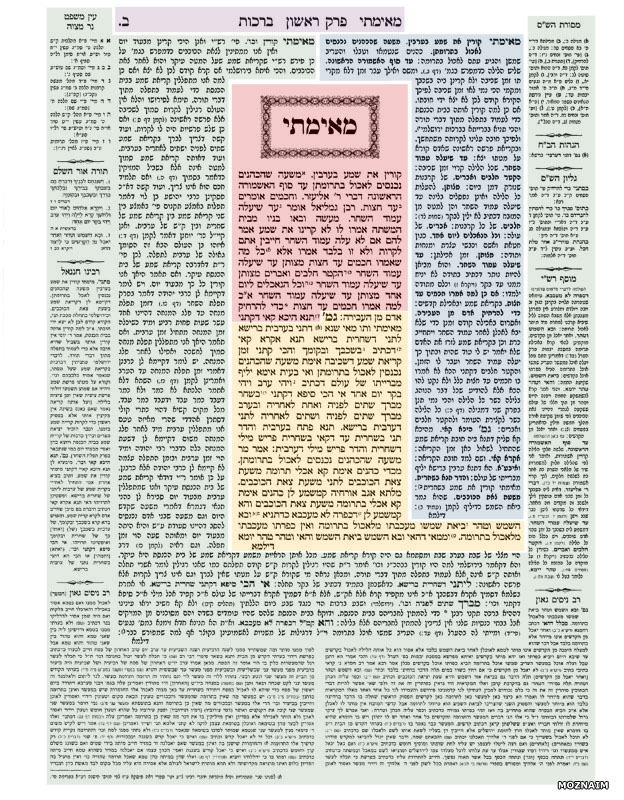 1. Mishnah2. The Gemara3. Rashi4. Other commentaries5. Pages and chapters
Going through the text a page a day, the book takes seven-and-a-half years to complete - a moment that is eagerly anticipated and celebrated with an event called Siyum Hashas. 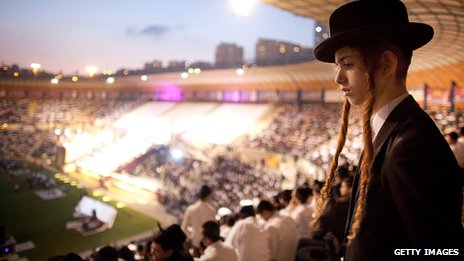 The Siyum Hashas event at the MetLife stadium was a sell-out
Attendance levels at Siyum Hashas events illustrate the Talmud's growing popularity. In 1975, the completion of the seventh cycle was marked by an event in New York's Manhattan Center with 5,000 attendees. In 1990, some 20,000 people in the US took part in the event and in 2012, at the completion of the 12th cycle, all 90,000 seats at the MetLife Stadium in New Jersey sold out for the event.
"It's clearly exploded in the last 10, 20 years, I think mostly through the number of people involved in the daf yomi project," says Dov Linzer. 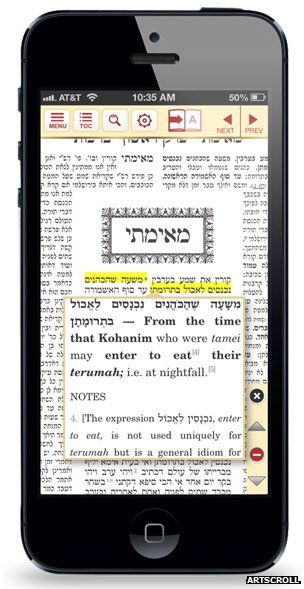 ArtScroll's Talmud app
And with each daf yomi cycle, the Talmud gets more accessible. Modern students can avail themselves of podcasts and round-robin emails from top scholars, and discuss difficult passages in online chat-rooms. A big moment came in 2005, with the publication of the first complete English-language edition of the work for more than 50 years, the Schottenstein edition. But there is no need to lug a giant volume around with you - the publisher, ArtScroll, is one of a number of organisations to have launched a Talmud app.
Since its launch last year, users have made around 15 million downloads, mostly of entire Talmudic volumes, Mayer Pasternak, director of Artscroll's Digital Talmud, told the BBC. To put that in perspective, the Jewish world population is thought to be a little under 14 million.
Pasternak says the Talmud is peculiarly suited to a digital treatment.
"It's a web of interconnected ideas and thoughts and commentaries," he says. "In one place something might be very poorly elaborated and you'll find in another place in the Talmud it's discussed at length - there's a constant cross-referencing process. We have about a million links in the digital app and we have a team of scholars putting the links in."
He adds that a social shift is under way. "A lot of the people that are interacting with us are women," he says. "It's obvious that they've heard about the Talmud and they're studying the Talmud."
For many Orthodox Jews, Talmudic study by women is seen as at best unnecessary and at worst, highly undesirable.
Gila Fine, editor-in-chief of religious publisher Maggid Books in Jerusalem, recalls that in her Orthodox school girls were not taught the Talmud. "As a teenager, I would often have these religious debates with my counterparts about various things in Judaism," she recalls. "And every single such argument ended with one of the boys throwing at me: 'Oh it's in the Talmud - you wouldn't know.' And that was it! I could never win an argument ever, because it stopped beyond the covers of this book, which I could not enter."
When she was 17, she secretly pulled a volume of Talmud down from her father's shelf, but was too scared to open it. "I stood there waiting for that lightning bolt to strike me down," she says. It was only later on, when Fine was at a progressive women's seminary, that she read the book properly.
Continue reading the main story

Before you read the Talmud... 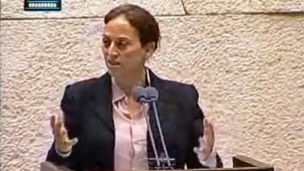 Ruth Calderon during her speech to the Knesset
It was just such a story that was read out in the Israeli parliament in February this year. Knesset member Ruth Calderon's 14-minute long maiden speech began with autobiography, as she described her Zionist upbringing and the "void" she had felt at not being able to read the Talmud as a girl. "I missed depth," she said. "I lacked words for my vocabulary, a past, epics, heroes, places, drama - stories were missing."
Then came a gesture which Fine describes as marking a profound cultural shift in Israel - Calderon opened a volume of Talmud. After reading the Aramaic, she embarked on a word-by-word textual analysis of a story about a rabbi who became immersed in his studies, and his wife who waited for him to return home. As a tear falls from the wife's eye, the roof that the rabbi is sitting on to study collapses underneath him and he falls to his death.
Calderon says the story was a comment on the rifts in Israeli society, and that the self-righteousness demonstrated by the rabbi in the story was something everyone could fall into. The key thing was the ability to see another's point of view - an ability central to being able to read the Talmud.
"Both sides of any relationship are usually right," she says. "Both of them have a point. Judaism does not belong to any one of us."
But the speech went viral and prompted frenzied editorials in the Jewish press - some of them critical.
Continue reading the main story

The Talmud: Big in Asia

This is partly because Calderon is a figurehead for secular Judaism, and sharply at odds with Israel's ultra-Orthodox community.
In the ultra-Orthodox yeshivas, scholars receive a stipend to study the Talmud, and are exempt from paying taxes and performing military service. Calderon opposes this - she came to the Knesset as a member of the Yesh Atid party, which polled unexpectedly well this year on a policy of "sharing the burden" (the burden of tax and military service).
Equally unpalatable to some ultra-Orthodox, Calderon opened the first liberal yeshiva, where women and non-believers are welcomed to study texts deemed important to Hebrew identity. It is said that about 100 liberal study halls now operate in Israel.
The Talmud is also making its mark in wider Israeli society in other ways. It increasingly appears in leadership courses, in newspaper columns and TV shows. A recent series of talks at the National Library, where Calderon used to be head of Culture and Education, asked a series of well-known personalities to discuss Talmudic passages.
Calderon points out that the increased popularity in Israel of Aramaic-sounding names like Alma is a testament to the resurgent popularity of the ancient text.
"The Talmud kind of goes with hipster culture," she says. "It's more laid back. While the Torah is all about fighting wars, the Talmud is domestic. I want the best people - the writers, the poets, the scriptwriters for TV - the people who are making Jewish culture [to read it].
"The secular elite that gave it up for many years are reclaiming it."
Gila Fine says that she wants the Talmud to be in every Jewish home and to be read by every Jew - male and female - but adds that there will always be a role for the Talmudic scholar who devotes a lifetime's study to the most complex and intricate tractates.
"This book is actually pulled out when you have to make a legal decision in Jewish law," she says. "You need specialists in the field. It's like saying: 'Do you want everyone to be dabbling in theoretical mathematics?' I may love theoretical mathematics, I may think that it's hugely important and everyone should be aware of theoretical mathematics, but I will also understand that to be in any way workable you really have to leave it to the experts."
Video by Anna Bressanin. You can listen to Heart and Soul on the BBC World Service. Listen back to the two-part series The Talmud via iplayer or browse the Heart and Soul podcast archive.
Follow @BBCNewsMagazine on Twitter and on Facebook
at October 29, 2013