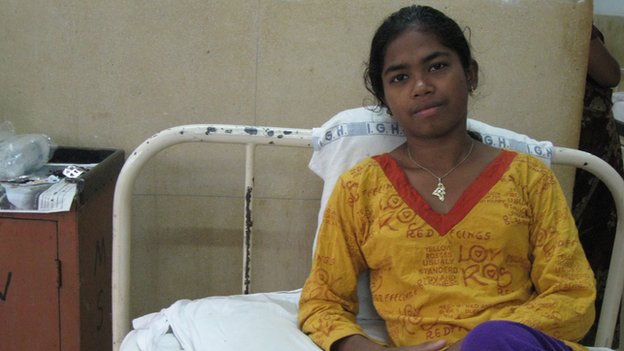 Fourteen-year old Nirmala Toppo has become something of a minor celebrity in the eastern Indian state of Orissa.
In June, panic gripped the industrial city of Rourkela one night when a herd of wild elephants entered residential areas from dense forests nearby.
Nirmala, forest department officials say, acted as a real-life "pied-piper" when she managed to drive the herd back to the forest, much to the relief of the residents.
She walked many miles with the herd, guiding it out of town, in the process getting blisters on her legs which later turned septic.
"The infection is now gone and my wound has almost dried up," she told BBC Hindi from her hospital bed where her treatment was organised by the local Red Cross Society.
Pitch invasion

State forest department officials sought help from Nirmala, who is originally from the neighbouring state of Jharkhand, when they could not get the elephants to leave the city.
Forest official PK Dhola says: "When the herd entered the city, we tried our best to contain its movement. There were 11 of them, including two calves. We managed to make the herd go into the local football stadium, but we were not sure how we could drive them back to the forest. It was a difficult task."
Mr Dhola says that was when the department decided to seek Nirmala's help.
"We knew of a tribal girl who lived in Jharkhand, who talked to elephants and was able to drive them back. We called up her father and she arrived along with some other tribal people from her village." 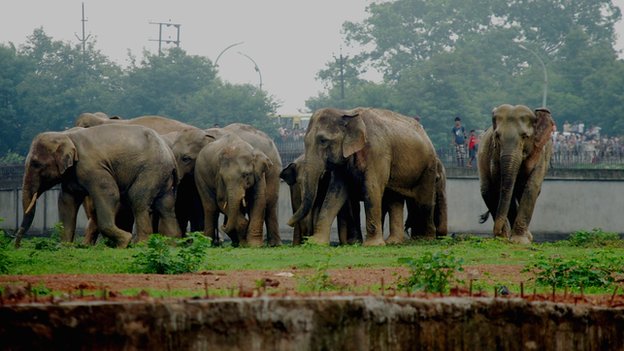 The herd was made to go into the local football stadium in Rourkela
The state government paid the girl for her services, he added.
Nirmala says she talks to the herd in her local tribal dialect - Mundaari - and persuades the animals to "return to where they belong".
"First I pray and then talk to the herd. They understand what I say. I tell them this is not your home. You should return where you belong," says Nirmala who is a Roman Catholic.
Her mother, she says, was killed by wild elephants and that was when she decided to learn the technique to drive them away.
In her work, she is assisted by her father and a group of boys from her village.
"We surround the herd. Then I go near them and pray and talk to them."
'Lady Tarzan'

But some are not convinced by Nirmala's methods.
Orissa-based social activist Rabi Pradhan says there is no scientific evidence that wild elephants can understand what a human says. Mr Pradhan says the girl claims to talk to the herd in her own tribal language, but there is no basis for the elephants to follow what she says. 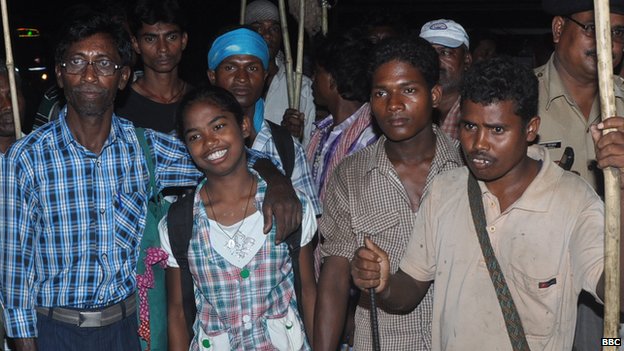 Nirmala is helped by family and local villagers
However, others explain such behaviour by saying that tribal people and elephants - or for that matter, other wild animals - have been cohabiting in the forests for ages.
Niel Justin Beck, a member of the district council in Jharkhand's Simdega area, where Nirmala comes from, says due to their co-existence with the wild animals, the tribal people know how to deal with them.
"In Jharkhand, we call Nirmala a lady Tarzan. Whenever marauding elephants enter a village or destroys crops, the local forest department officials never turn up.
"It is then that the villagers approach Nirmala for help. And she is able to successfully drive away the herd after talking to them."
Growing industrialisation

More than 3,000 elephants roam the forests of the three states of Jharkhand, Orissa and Chhattisgarh, stretching across central and eastern India, but over the past decade the region has become the epicentre of man-animal conflict.
According to the ministry of environment and forests, more than 200 elephants and some 800 people have been killed in the last 10 years.
Continue reading the main story

The region is rich in mineral resources and encroachment of their habitat due to increased mining and industrial activity have caused problems for the movement of wild elephants.
A violent Maoist insurgency in the region has also added to the problem, say experts.
Forests provide easy shelter for the armed insurgents and large parts of the forests are heavily mined - frequent encounters between the security forces and rebels have also disturbed the wildlife habitat, they say.
at October 30, 2013