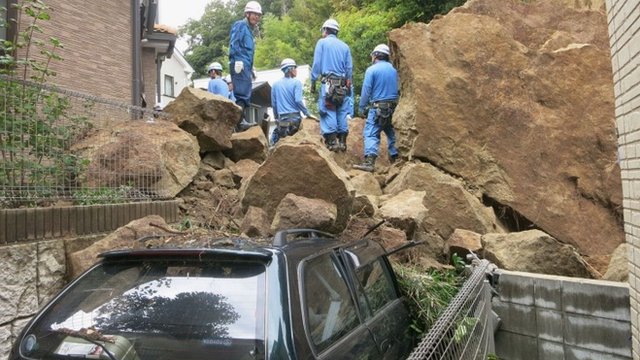 At least 14 people have been killed after a powerful typhoon passed close to the Japanese capital, reports say.
Typhoon Wipha caused landslides and flooding on Izu Oshima island, south of Tokyo.
Many people died when houses collapsed or were buried in mudslides. Two were found dead near a river.
At the crippled Fukushima nuclear plant, operators pumped out rain water from around storage tanks holding contaminated water.
In Tokyo, flights were cancelled, bullet train services suspended and schools closed.
"It is the strongest typhoon in 10 years to pass the Kanto [Tokyo area] region," Hiroyuki Uchida, the Japan Meteorological Agency's chief forecaster, told journalists on Tuesday.
'Crackling sound'

The storm brought strong winds and record rainfall - 122mm (4.8 inches) in one hour on Wednesday morning - to Izu Oshima island, which lies some 120km (75 miles) south of Tokyo.
Officials on the island said that 13 bodies had found and more than 50 people were unaccounted for.
"We have no idea how bad the extent of damage could be," town official Hinani Uematsu said.
Local media described mud and debris strewn around houses. 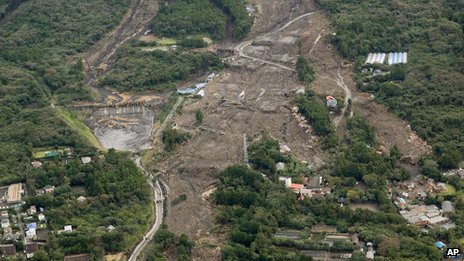 Houses were buried in mudslides triggered by the rain 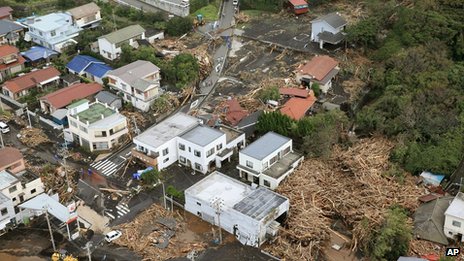 Rescuers were struggling to access some areas, reports said 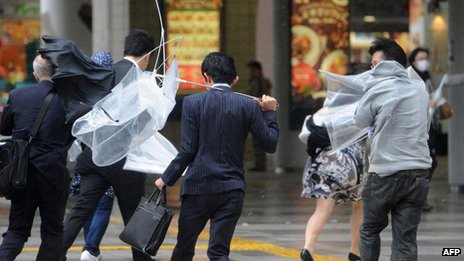 In the capital, the storm led to train services and flights being cancelled
"I heard a crackling sound and then the trees on the hillside all fell over," a woman on the island told national broadcaster NHK television. "Then mud slid as far as the house."
Rescuers were struggling to access many areas, local reports said.
"City hall and fire station officials are doing rescue work in places accessible," a local official told AFP news agency.
In Tokyo, a woman died after falling in a river and a search was under way for two young boys last seen on a beach, reports said.
Around 400 domestic and international flights were also cancelled in the capital, Kyodo news agency said.
Nearly 20,000 people were ordered to evacuate and thousands of schools shut as a result of the typhoon, Reuters news agency reported.
Typhoon Wipha was expected to move north-east and weaken over the course of the day.

Around midday it passed close to the crippled Fukushima nuclear plant, where contaminated water used to cool reactor cores is being stored in temporary tanks.
Plant operator Tokyo Electric Power Company said on Tuesday that it had made "preparations for proper management of contaminated water" and would "patrol places that could have inflows of water [from the storm]".
Izu Oshima, a volcanic island popular with tourists, has more than 8,000 residents.
at October 16, 2013