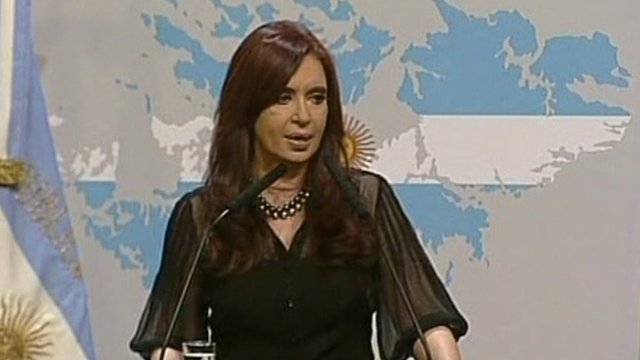 Cristina Fernandez: "This is a regional and global cause because they are militarising the South Atlantic once more"
Continue reading the main story

Argentina is to make a formal complaint to the United Nations about British "militarisation" around the disputed Falkland Islands.
President Cristina Fernandez de Kirchner made the announcement at a meeting of MPs, senior officials, and veterans of the 1982 war Argentina fought with Britain over the islands.
Tensions between the two countries have been increasing in recent weeks.
Last month, the UK said it was sending a destroyer to the region.
The status of the islands, known in Argentina as the Malvinas, is still a highly sensitive issue for Buenos Aires.
In December, Mercosur, a South American trading bloc, closed its ports to ships flying the Falkland Islands flag.
Then, last month, the UK said it was sending one of its newest destroyers, HMS Dauntless, to the South Atlantic, off the Falklands.
London described the move as "routine".
Prince William, grandson of Britain's Queen Elizabeth II and second in line to the throne, was also deployed to the islands in his role as a search and rescue helicopter pilot.

Fergal Keane BBC News
In taking a complaint to the UN the Argentine side knows that Britain, as a permanent member of the Security Council, can ultimately veto any critical resolution.
Before the speech there had been speculation that Ms Fernandez might signal an end to the important air link between Chile and the Falklands which must use Argentine air space - a move that would have created significant practical difficulties for the islanders.
That she chose not to, illustrates that Argentine tactics are not about achieving any kind of immediate practical effect, but are focused instead on a longer-term campaign of diplomatic attrition.

In her address on Tuesday, Ms Fernandez accused the UK of "militarising the South Atlantic one more time".
"We will present a complaint to the UN Security Council and the UN General Assembly, as this militarisation poses a grave danger to international security," Ms Fernandez said.
"We cannot interpret in any other way the deployment of an ultra-modern destroyer accompanying the heir to the throne, who we would prefer to see in civilian attire."
She asked UK Prime Minister David Cameron "to give peace a chance".
The UK Foreign Office later issued a statement that said: "The people of the Falkland Islands are British out of choice. They are free to determine their own future and there will be no negotiations with Argentina over sovereignty unless the islanders wish it."
The BBC's Fergal Keane says President Fernandez's initiative is consistent with recent Argentine attempts to internationalise the Falklands issue.
Her government has gained the political support of nations such as Brazil and Uruguay that have banned ships flying the Falklands flag from visiting their ports.
Chile's foreign minister also recently declared his support for Argentine sovereignty over the islands.
A crowd waving Argentine flags and shouting "Malvinas" rallied near the government palace where Ms Fernandez was speaking.
Britain has held the Falkland Islands since 1833.
at February 09, 2012