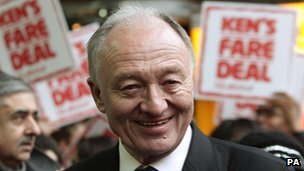 Conservative MPs have called for Labour's candidate for London mayor to apologise for saying their party is "riddled" with homosexuals.
Ken Livingstone said some Tory MPs denounce homosexuality while secretly "indulging".
He later refused to apologise saying the remark was meant to be humorous and a "backhanded compliment".
But two Tory MPs have written to Labour leader Ed Miliband calling on him to ensure the remarks are retracted.
Discussing the issue of privacy in an interview in the New Statesman magazine, Mr Livingstone said: "[The public] should be allowed to know everything, except the nature of private relationships - unless there is hypocrisy, like some Tory MP denouncing homosexuality while they are indulging in it."
Asked why he referred particularly to Conservative MPs, he added: "Well, the Labour ones have all come out.

Spokesperson for Ken Livingstone
"As soon as Blair got in, if you came out as lesbian or gay you immediately got a job. It was wonderful.
"You just knew the Tory party was riddled with it, like everywhere else is."
He also said in the interview that Baroness Thatcher was "clinically insane" while prime minister.
On Thursday, Mr Livingstone defended himself on LBC radio, saying the Conservatives used to be "horrendously homophobic", but acknowledged that is no longer the case.
"It was a slightly backhanded compliment," he said.
Referring to his remarks about Baroness Thatcher, he said: "This has been a standard line in my set speeches for 30 years... I've always made that joke and I'll carry on doing it."
'Faux outrage' But Conservative MP for Ealing Central Angie Bray said: "These are the sort of offensive remarks we hear all too often from Labour's candidate for mayor.
"Ed Miliband should condemn these outrageous comments and get him to apologise immediately."
Gay Labour MP Chris Bryant said the "faux outrage turns my stomach".
He said: "Of course 'riddled' is a pretty daft word, but if I were drawing up a list of the British politicians who have argued and fought for LGBT rights even when it was unpopular, it would include Labour figures like Chris Smith and Ken Livingstone - and Boris Johnson simply wouldn't feature.
"I fully understand that it was pretty miserable in the Tory party as a gay man until very recently and I am delighted that there are now out gay Tories, but we all know there were closeted gay MPs who voted hypocritically."
A spokesperson for Mr Livingstone said: "Ken is clearly saying the advance of lesbian and gay people into politics is unequivocally a good thing.
"He has fought for equality for gay and lesbian people throughout his life, and the fact they are represented in all major political parties is a sign of the progress that has been made."
In an interview with the same magazine, current mayor Boris Johnson said his proudest boast was to have "delivered a sound, progressive administration of London over the last four years, which has cut tax and cut crime".
Mr Livingstone said that, if elected, he would restore 1,700 police jobs and cut public transport fares.
at February 09, 2012