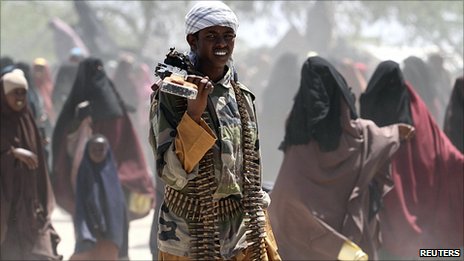 Residents says the Mogadishu of today is unrecognisable from what the city was like 20 years ago
Somalis tell the BBC about their memories of life in the capital, Mogadishu, when it was "the best city in Africa", before the fall of Siad Barre 20 years ago and the lawlessness that has followed.

Mogadishu used to be like any other capital city in the region.

Abdi Said Farah
I remember the days spent swimming and having picnics and then, in the evening, we would go out to the cinema or even to the theatre.
That was when we still had a government.
And in those days we had embassies here in Mogadishu for all the other countries in the world.
So many foreigners lived here. It was so cosmopolitan.
Not xenophobic like it is today.
My city was beautiful and we had tranquillity.
I will never forget one situation that happened one day while we were at the beach.
My friend ended up arguing with an Italian woman.
He was floating around on his lilo in the sea, as was this Italian woman, who also had a lilo, and he was moving so close to her so she was asking why he was very close to her.
He ended up being stupid - he was still a teenager - and spoke indecently to her.
The lady called the police. They came and took him straight away to the court.
In those days both Somalis and foreigners used to enjoy equal rights.
My friend was told off and ordered to apologise to the lady in front of the court.
The situation now is incomparable. I am so full of nostalgia.

Exactly three months ago I came back to Mogadishu but I left a long time ago.

Life is limited. I feel trapped. No-one in Mogadishu is free”

Faysal Aamin
I remember when I left - It was 1992. I can remember the violence and the conflict.
There was fighting going on and that was the reason why I left at that time.
The situation was chaos and it was a really difficult situation at that time.
I was looking for a future and a better life. I reached London on 23 April 1993.
I recently returned because my mum was sick and so I could not stay away from her any longer. That is the reason I risked my life to come back.
My mum is doing ok now and so I am thinking that soon I will be able to go back to my lovely country, the UK.
There is no better place than London for me.
But it wasn't always. Mogadishu used to be the best city in Africa.
A place where your family and friends were there. A normal life. It was a wonderful life.
I can't see any way how we can have that life again.
'War is everywhere' Now, in Mogadishu, things are really different. I could not compare it to anywhere. It is divided. Mogadishu is not a place you can trust or make a better life. 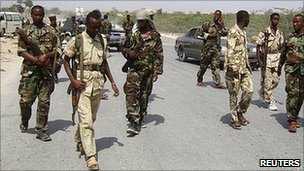 Policemen used to carry sticks, now you see gunmen across the city
There is not a single postman who can deliver you a letter. There is no normal daily life. There is no security. There is no night life. As soon as four o'clock in the afternoon comes there is no single car on the roads and you cannot walk in the roads.
Life is limited. I feel trapped. No-one in Mogadishu is free.
My mum still lives in the same area that I grew up in but I am staying in a hotel, which is well-guarded.
Twenty years ago the hotel I am staying in - the Sahafi - was one of the best hotels and the area was like Chelsea in London. It was a rich area and very nice at that time. It was the heart of the city.
Inside the hotel is OK and the rooms are fine. It is not like a four star but maybe a two star but the food is good.
But outside of the hotel things are different.
It is like there is no life. It is another world. You face so many consequences.
War is everywhere. The walls are broken. There are no trees. There is not one beautiful place where you can sit.
It really is terrible. I hope I will be able to go home soon.

In the heyday when our country was at peace, it was incomparable.

Nowadays, we no longer have music. Mortars and gun shots are the terrible music to our ears”

Mohamed Ali
Honestly speaking, I remember when students come out from school, all in their uniforms... you cannot imagine how colourful they were.
All education grades - from primary to university - were free of charge and now poor people can't pay school fees and they have to remain ignorant.
If I remember that time, I am nearly crying.
The youth used to think of their future and had good minds but now you see most of our Somali youth are some way, directly or indirectly, involved in violence.
We used to see good cars, good houses and good minds but now it is the opposite.
We see destroyed houses, battle wagons and people with clan mindsets and empty bellies. 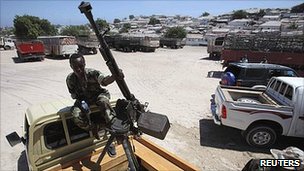 Cars have been replaced with battle wagons, says Mohamed Ali
Before, a policeman with only a small stick would be obeyed.
But now, we live in anarchy - a young man fires and everyone runs away.
Nowadays, we no longer have music.
Mortars and gun shots are the terrible music to our ears.
I worry about our destiny.
I wish to see my country stable and my people living in harmony.
But I am not sure whether I will witness that admirable era again before I die.

Listen to a special hour-long BBC Focus on Africa programme marking 20 years since the fall of Somalia's leader Siad Barre on Wednesday 26 January 2011 at 1500 GMT.
at February 09, 2012