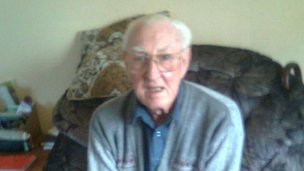 Leslie Trotman died from injuries police believe were sustained during the attack
An 83-year-old man died from injuries sustained when a "pit-bull type" dog escaped from a neighbour's garden in London, it has emerged.
Police said Leslie Trotman from Brentford was bitten on his right leg, knocking him over resulting in injuries to his left side and hand.
The incident happened on 23 January however Mr Trotman was found dead by his son on 29 January.
A man has been arrested on suspicion of manslaughter and released on bail.
Three dogs have been seized from an address in Rowan Road, Brentford.
Police said the victim had attended West Middlesex Hospital for treatment shortly after the incident and the police attended the following day.
A post-mortem examination which took place at Fulham Mortuary on 2 February found that the cause of death was found to be haemorrhage resulting from a rupture to the spleen.
Officers believe these injuries were sustained during the attack by the dog.
Police have appealed for anyone with information to contact them.
at February 09, 2012