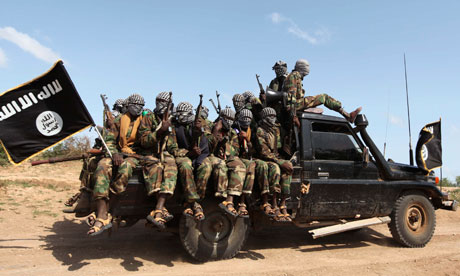 Al-Shabaab insurgents in Somalia. It is thought there are about 50 Britons fighting with al-Shabaab, according to Rusi. Photograph: Feisal Omar/Reuters
Fifty Britons in Somalia are among an increasing number of overseas fighters who could herald a new wave of international terrorism, a leading British security thinktank has warned.
They reflect the growing appeal to potential jihadists of ungoverned spaces where they can train and gain experience in attacks before returning home to Britain and elsewhere, the Royal United Services Institute (Rusi) says.
The report (pdf) comes at a time when Britain's security services are concentrating on protecting the London Olympics this summer, putting off plans for new ways to counter terrorist threats.
With al-Qaida's core on the Afghan/Pakistan borders now ineffective as an operational unit, the jihadist threat has spread to separatist movements such as that in Somalia.
Insurgencies and wars in Africa and elsewhere "have increasingly become the training grounds for individuals who would become terrorists", says the Rusi director general, Michael Clarke.
Many of them are "lone wolves", radicalised by material on the internet, and indulge in "terrorist tourism". Often they are connected to family or friends who have already gone to the conflict zone.
"Britons are thought to make up some 25% of the 200 or so foreign fighters that the al-Shabaab group in Somalia currently fields", Clarke writes.
"More experienced lone-wolf terrorists are likely to be returning to Britain in the next couple of years, not from training camps in Pakistan and via airports in Karachi and Dubai but from wars in Somalia, Yemen, or Nigeria; from the renewed violence in Iraq; and from destinations and via routes that will be far more difficult for security services to monitor."
The arrival home of "self-radicalised" fighters will coincide with a steady release from prison of people convicted of terrorist offences in Britain over the last decade, the Rusi report warns. It says their sentences, for good legal reasons, typically have not been very long.
Meanwhile, the number of British Muslims in prison for offences not related to terrorism has grown by more than 540% since 1991, standing at 10,400 at the end of 2010 – more than 12% of the total prison population.
"It has long been believed among probation officers that around a tenth of Muslim prison inmates are subject to effective radicalisation while serving their sentences", says Clarke. "Some of these individuals will be vulnerable to the appeal of local leaders who possess all the credibility of having just come back from a warzone in the global jihad."