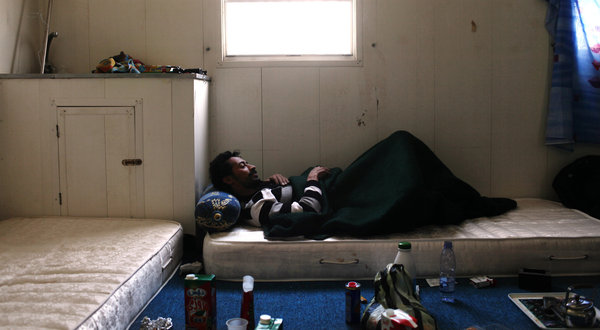 Jehad Nga for The New York Times
A Zintan militia member rested in a housing container in Tripoli. More Photos »

TRIPOLI, Libya — As the militiamen saw it, they had the best of intentions. They assaulted another militia at a seaside base here this week to rescue a woman who had been abducted. When the guns fell silent, briefly, the scene that unfolded felt as chaotic as Libya’s revolution these days — a government whose authority extends no further than its offices, militias whose swagger comes from guns far too plentiful and residents whose patience fades with every volley of gunfire that cracks at night.

In Tripoli, a Temporary Home for the Displaced

Old men provide security for a makeshift displacement camp in Tripoli. More Photos »
The woman was soon freed. The base was theirs. And the plunder began.
“Nothing gets taken out!” shouted one of the militiamen, trying to enforce order.
It did anyway: a box of grenades, rusted heavy machine guns, ammunition belts, grenade launchers, crates of bottled water and an aquarium propped improbably on a moped. Men from a half-dozen militias ferried out the goods, occasionally firing into the air. They fought over looted cars, then shot them up when they did not get their way.
“This is destruction!” complained Nouri Ftais, a 51-year-old commander, who offered a rare, unheeded voice of reason. “We’re destroying Libya with our bare hands.”
The country that witnessed the Arab world’s most sweeping revolution is foundering. So is its capital, where a semblance of normality has returned after the chaotic days of the fall of Tripoli last August. But no one would consider a city ordinary where militiamen tortured to death an urbane former diplomat two weeks ago, where hundreds of refugees deemed loyal to Col. Muammar el-Qaddafi waited hopelessly in a camp and where a government official acknowledged that “freedom is a problem.” Much about the scene on Wednesday was lamentable, perhaps because the discord was so commonplace.
“Some of it is really overwhelming,” said Ashur Shamis, an adviser to Libya’s interim prime minister, Abdel-Rahim el-Keeb. “But somehow we have this crazy notion that we can defeat it.”
There remains optimism in Tripoli, not least because the country sits atop so much oil. But Mr. Keeb’s government, formed Nov. 28, has found itself virtually paralyzed by rivalries that have forced it to divvy up power along lines of regions and personalities, by unfulfillable expectations that Colonel Qaddafi’s fall would bring prosperity, and by a powerlessness so marked that the national army is treated as if it were another militia.
The government could do little as local grievances gave rise last month to clashes in Bani Walid, once a Qaddafi stronghold, and between towns in the Nafusah Mountains, where rival fighters, each claiming to represent the revolution, slugged it out with guns, grenades and artillery.
“It’s a government for a crisis,” Mr. Shamis said, in an office outfitted in the sharp angles of glass and chrome. “It’s a crisis government. It is impossible to deliver everything.”
Graffiti in Tripoli still plays on Colonel Qaddafi’s most memorable speech last year, when he vowed to fight house to house, alley to alley. “Who are you?” he taunted, seeming to offer his best impression of Tony Montana in “Scarface.”
“Who am I?” the words written over his cartoonish portrait answered back.
Across from Mr. Shamis’s office a new slogan has appeared.
“Where are you?” it asks.
The question underlines the issue of legitimacy, which remains the most pressing matter in revolutionary Libya. Officials hope that elections in May or June can do what they did in Egypt and Tunisia: convey authority to an elected body that can claim the mantle of popular will. But Iraq remains a counterpoint. There, elections after the American invasion widened divisions so dangerously that they helped unleash a civil war. Continued
at February 09, 2012