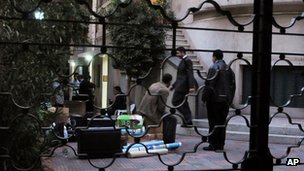 Egypt has said it will not be persuaded by the potential loss of US aid to end an ongoing investigation into foreign-funded non-governmental organisations.
Prime Minister Kamal Ganzouri said his government would "apply the law" in the case of the NGOs and "not back down".
Forty-three pro-democracy activists, 19 of them Americans, are to be put on trial for setting up groups without licences and receiving illegal funding.
A judge meanwhile said their work constituted "pure political activity".
On Tuesday, three leading US senators warned that the risks of a "disastrous" rupture in bilateral relations had "rarely been greater".
John McCain, Kelly Ayotte and Joe Lieberman said opponents of the US within the Egyptian government were "exacerbating tensions and inflaming public opinion in order to advance a narrow political agenda".
'Much evidence' US Secretary of State Hillary Clinton warned on Saturday that failure to resolve the dispute might lead to the loss of the $1.3bn (£819m) in military aid and about $250m in economic aid Washington gives Egypt every year.
The next day, prosecutors referred the activists - who include the son of US Transportation Secretary Ray LaHood - to trial before a criminal court.

Judge Samih Abu Zaid
At a news conference in Cairo on Wednesday, Mr Ganzouri insisted that it was purely a judicial matter and that he would not be swayed "because of aid or other reasons".
One of the two judges overseeing the case meanwhile said NGOs had been operating in Egypt "without a licence", and that their work constituted "pure political activity and... nothing to do with civil society".
"It is a very large and complicated case involving hundreds of people and organisations, Egyptian and foreign," Samih Abu Zaid said.
The activists faced trial because there was "much evidence, including witness accounts, expert accounts and confessions", he added.
Judge Abu Zaid also insisted the raids in December on 17 offices of local and foreign NGOs - including the International Republican Institute (IRI), the National Democratic Institute (NDI), Freedom House and the Konrad-Adenauer Foundation - had been conducted "according to the law".
"The foreign organisations are not civil society groups but branches of organisations based abroad," he said, adding that they had received illegal funding from the US, Europe and other Arab states.
'Another dimension' Their staff had been "working in Egypt for years on tourist visas" and had been instructed not to apply for work permits, because the Egyptian National Security Service refused to give them licences, the judge said.
"They also violated Egyptian tax laws."
He said the NGOs' work "took on another dimension after the 25 January revolution", which forced former President Hosni Mubarak to resign.
"The activities became political, related to training political parties or mobilising people," he added. "Money was transferred to the organisations a number of ways, including through individual accounts of employees, instead of bank accounts in the organisation's name; or through money transfer companies."
On Monday, White House spokesman Jay Carney told reporters that the activists involved had "done nothing wrong", adding: "Their only assignment is to support Egypt in its transition to democracy."
at February 09, 2012