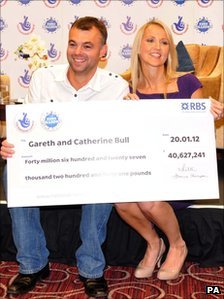 A young couple from Nottinghamshire have won £45m in the EuroMillions lottery, Camelot has revealed.
The lottery operator said the couple won £45,160,170.50 in Tuesday's rollover draw.
It is the second major EuroMillions win in the county in three weeks. Gareth, 40, and Catherine Bull, 35, from Mansfield, won £40m on 20 January.
Camelot said the identities of the latest winners would be revealed at a press conference later.
The prize is the seventh largest win in the UK, Camelot said.
A spokesman said: "It is fantastic news to have another UK winner so soon after Gareth and Catherine Bull from Mansfield won £40m."
Mr and Mrs Bull's win came from a lucky dip ticket.
The biggest EuroMillions prize was a £161m jackpot won by Colin and Chris Weir, from Largs, Scotland, in 2011.
Nine countries - the UK, the Republic of Ireland, Spain, Portugal, France, Belgium, Luxembourg, Switzerland and Austria - participate in EuroMillions.
at February 09, 2012

With that great money , they will be able to plan a very momentous wedding and profiting business. They were so lucky for that big amount. Even though I work so hard in my whole life, I will never gain that large amount of money unless I won a sweepstake.