An Egyptian court has confirmed death sentences for 183 Muslim Brotherhood supporters accused of a 2013 attack on a police station, lawyers say.
A judge had recommended the death penalty for the 683 defendants, in a widely-criticised mass trial in April.
Mohammed Badie, leader of the banned group, was among those whose sentences were upheld. Appeals are now likely.
The military-installed government has sentenced hundreds of its opponents since December. 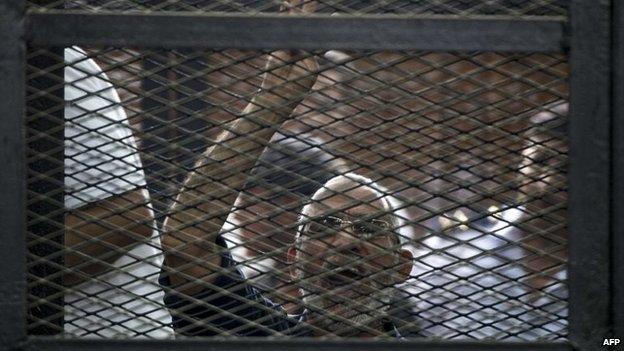 Muslim Brotherhood leader Mohammed Badie is facing execution after two separate trials
Authorities have cracked down harshly on Islamists since former President Mohammed Morsi, who belongs to the Muslim Brotherhood, was removed by the military in July 2013 following mass protests.
Saturday's verdict was delivered by a court in the town of Minya, south of Cairo.
Four of the defendants were given sentences of 15-25 years in jail and the rest were acquitted.
The defendants were accused of involvement in the murder and attempted murder of policemen in Minya province on 14 August 2013, the day police killed hundreds of Muslim Brotherhood supporters in clashes in Cairo.

Analysis by Bethany Bell, BBC news, Cairo
This is the largest confirmed mass death sentence to be passed in Egypt in recent times. The verdicts and the speed at which the trial was handled have drawn widespread criticism from human rights groups.
The judge, Sa'ed Yusef Sabri, has a draconian reputation, and is known as al-Jazzar, the Butcher. The activist and former chairman of the Egyptian Organisation for Human Rights, Hesham Qasim, told the BBC it was time for the authorities to take measures against the judge for these unprecedented sentences.
He said the judge had not observed due process, and that once the verdicts were challenged, all the sentences would be overturned. The death sentences, he said, would have a negative impact on Egypt's image around the world and its economy.
The prominent human rights activist, Aida Seif al-Dawla, said the verdicts were politically motivated. The government, she said, was settling its political scores with the Brotherhood through executions.

The charges ranged from sabotage and terrorising civilians to murder. Of the 683, all but 110 were tried in absentia.
Defence lawyers called the mass trial "farcical" and said many of those accused were not present during the clashes.
Following April's trial, the recommended death sentences were referred to the Grand Mufti - Egypt's top Islamic authority - for review.
The court was to consider his opinion before issuing its final decision.
However correspondents say the case is likely to go to Egypt's appeal courts.
On Thursday, Mr Badie and 13 others were also given recommended death sentences over a separate case involving deadly clashes last year.
at June 21, 2014