Ukraine's Poroshenko sworn in and sets out peace plan

Petro Poroshenko has been sworn in as president of Ukraine, setting out a plan to bring peace to the conflict-torn east of the country.
The 48-year-old tycoon, who won the 25 May election, offered political concessions to people in the east and said he did not want war or revenge.
But he also said he had told Russia's president that Crimea, which Moscow has annexed, would "always be Ukrainian".
Some separatists dismissed the speech, saying they would "never surrender".
Russia's ambassador said the address was a "promising declaration of intent".
Mikhail Zurabov, who attended the inauguration, said Ukraine should end its military operation in the east, provided that militias called a ceasefire and allowed humanitarian access.
Jump media player
Media player help
Out of media player. Press enter to return or tab to continue.
Petro Poroshenko called on all who had engaged in armed action to ''lay down their arms''
Kiev says Moscow is backing armed militants in the eastern Donbass area, an accusation that Russia denies.
Clashes continued in some eastern areas on Saturday, with reports of the army shelling the rebel stronghold of Sloviansk and of shooting further south in Mariupol.
'Huge sacrifice'

Mr Poroshenko was inaugurated in the presence of dozens of foreign dignitaries - including US Vice-President Joe Biden - in parliament in the capital Kiev. 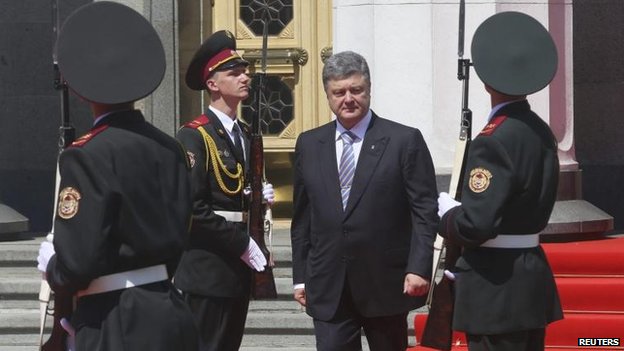 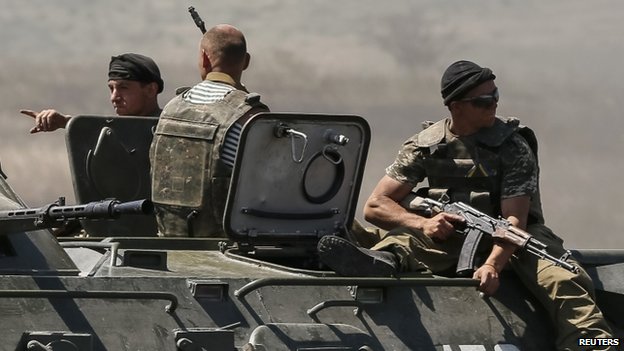 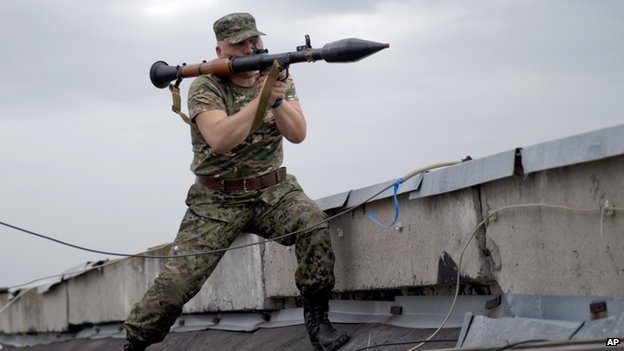 The rebels are continuing to hold a number of government buildings in the east
Mr Poroshenko, the owner of the Roshen chocolates group, laid out a programme for ending the crisis that included an offer of early regional elections in the east and a decentralisation of power to the regional administrations.
He said: "I don't want war. I don't want revenge, despite the huge sacrifice of the Ukrainian people."

Analysis
By Kiev correspondent David Stern
Petro Poroshenko's inauguration speech was forceful and seemed to hit all the right notes for his supporters. Local commentators and bloggers' reaction was overwhelmingly positive.
Pro-revolution Ukrainians were undoubtedly heartened by his strong position on keeping the country unified, and advocacy for EU membership.
The Kremlin will give its reaction fairly soon: Moscow and Kiev officials are expected to meet on Sunday to discuss the crisis in Ukraine's east.
Ukrainians in the east and south may see Mr Poroshenko as a man who will defend their interests. But they may be angered by his calls to join the EU and insistence that Ukrainian remain the sole state language - and feel once again that their voices are not being listened to.
Poroshenko - the rescuer of Ukraine
Poroshenko speech excerpts

Mr Poroshenko called on separatists in the east to lay down their arms, saying he would guarantee indemnity from criminal charges to all those who did not have blood on their hands.
But he added: "Talking to gangsters and killers is not our path."
The BBC's David Stern in Kiev says part of the speech was in Russian - directed at those in strife-torn Donbass - and offered concessions on Russian language and a corridor for Russian fighters to return home.
But our correspondent says there were also standing ovations for the president's comments on Crimea and on ties with the European Union - which he reiterated he wanted Ukraine to join. Insurgency leader Valery Bolotov said he did not believe Mr Poroshenko's offer of amnesty
Mr Poroshenko said of Crimea - annexed in March by Russia - "Crimea is, was and always will be Ukrainian soil."
Referring to a brief meeting with Russian President Vladimir Putin in France on Friday, he said: "I put that clearly to the Russian leader in Normandy."
Mr Poroshenko also said there would be no discussion concerning the territorial integrity of Ukraine.
Mr Poroshenko condemned the rule of former President Viktor Yanukovych, seen by many as pro-Russian, who fled in February after a popular uprising in Kiev.
Jump media player
Media player help
Out of media player. Press enter to return or tab to continue.
The Russian and Ukrainian leaders met as fighting continued in east Ukraine
He accused Mr Yanukovych of financing terrorism in the east, saying he was "fully responsible for the situation there today".
Some separatists were unimpressed by Mr Poroshenko's speech, including a spokesman in Donetsk, Fyodor Berezin, who said the president wanted "one-sided disarmament and for us to surrender. That will never happen".
An insurgency leader in Luhansk, Valery Bolotov, said he did not believe Mr Poroshenko's offer of amnesty.
After their meeting on Friday, Mr Putin said he liked Mr Poroshenko's approach but would wait to see what he could deliver.
Mr Putin and US President Barack Obama also held an "informal meeting" lasting about 10-15 minutes, according to the White House.
On Saturday, US Secretary of State John Kerry struck an upbeat note, saying: "I hope that in the next few days we can see some steps taken that will reduce the tensions... I'm confident there are ways forward."
Targeted sanctions were introduced by the EU and US after Russia annexed Crimea, following a controversial referendum on joining Russia.
Since then, a bloody insurgency has gripped Ukraine's eastern provinces of Donetsk and Luhansk. 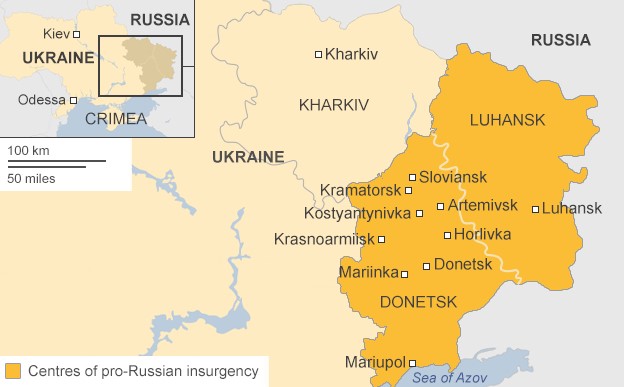 Are you in Eastern Ukraine? Are you affected by unrest in the region? You can get in contact by emailing haveyoursay@bbc.co.uk with the subject title 'Ukraine'.
Or get in touch using the form below.
Send your pictures and videos to yourpics@bbc.co.uk or text them to 61124(UK) or +44 7624 800 100 (International). If you have a large file you canupload here.
at June 07, 2014