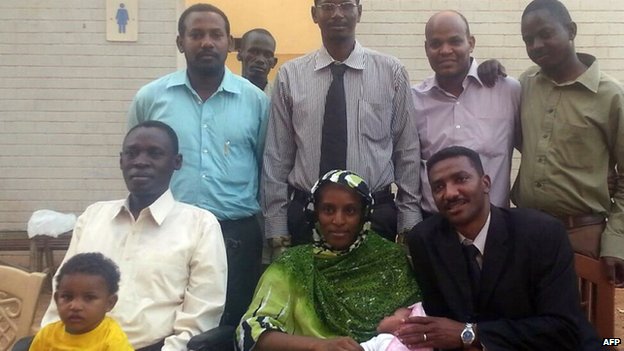 A Sudanese woman whose death sentence for marrying a Christian was overturned has been released from jail again, after she was detained at Khartoum airport on Tuesday.
Meriam Ibrahim's lawyer, Muhannad Mustafa, said that she was currently in the US embassy with her family.
Mrs Ibrahim had been detained on charges of falsifying ID documents.
She was first released on 23 June when an appeals court lifted her death sentence for renouncing Islam.
Her sentencing in May to hang for apostasy sparked an outcry at home and around the world.
Mrs Ibrahim, 27, has been held at a police station in Khartoum, Sudan's capital, since Tuesday, when she was prevented from leaving the country along with her husband, Daniel Wani, and their two children.
According to Reuters news agency, quoting her lawyer, Mrs Ibrahim was released on the condition that she remains in Sudan.
"Mariam was released after a guarantor was found, but, of course, she would not be able to leave the country," Mr Mustafa said.
She has been charged with forgery relating to the South Sudanese travel document she was carrying and providing false information.
South Sudan's embassy in Khartoum says the emergency travel documents were issued by the South Sudan authorities and are genuine; her husband is a Christian originally from South Sudan and holds US citizenship.
However, Sudanese officials say she should have used a Sudanese passport and on Wednesday Sudan's Foreign Ministry summoned the US and South Sudan charges d'affaires over the incident.
at June 26, 2014