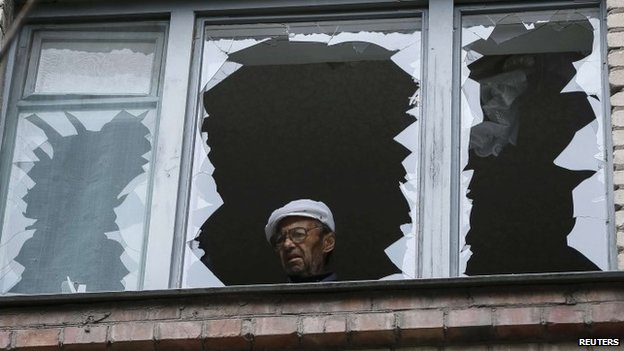 Ukrainian President Petro Poroshenko has told President Vladimir Putin that reports of Russian tanks moving into Ukrainian territory are unacceptable.
Ukraine's interior minister said earlier that three tanks had entered rebel areas of the east, and fighting was under way.
Arsen Avakov said that the tanks entered Ukraine along with other armour through a border checkpoint controlled by rebels in the Luhansk region.
Russia denied the report.
The foreign ministry said it was "another fake piece of information".
Moscow has accused President Poroshenko of not delivering on his earlier pledge to stop fighting in the east. It wants an investigation into allegations that Ukrainian forces used banned incendiary bombs against civilians. 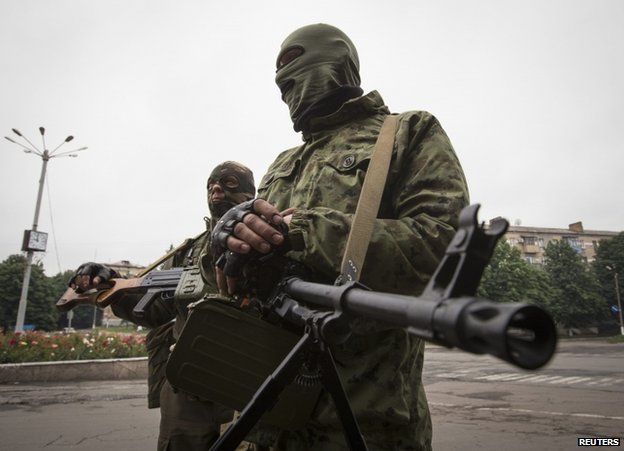 Rebel fighters could be seen in Snizhne on Thursday
"The lack of any progress whatsoever in efforts to stop the violence and halt military operations... is causing increasing concern," Russian Foreign Minister Sergei Lavrov said.
He said that reports in the Russian media that incendiary bombs were being used was another "cause for special concern".
The bombs are designed to trigger major firestorms and were often used during the Vietnam War before they were banned by the United Nations.
Ukraine has denied using the weapons. It has accused Russia of allowing the rebels to deploy three Soviet-era T-72 tanks across the border into the east of the country.
Ukraine's presidency said in a statement that Mr Poroshenko, who was elected last month, had a "substantial" conversation by telephone with Mr Putin on Kiev's plan of bringing peace to the east.
'Destroyed'
Mr Avakov said the tanks had crossed the border from Russia along with armoured personnel carriers and artillery pieces in the Dyakove area of Luhansk region, before moving into the neighbouring Donetsk region.
Two headed towards the town of Horlivka and were attacked by government forces, he added.
Unverified video has been posted on YouTube of a battle tank rolling down a street said to be in Snizhne. The footage was shot from a flat overlooking the street.
A second clip, also said to have been recorded in Snizhne, shows a similar tank passing a roundabout.
There was no confirmation about the tanks from the insurgents.
Pro-Russian separatists in the Donetsk and Luhansk regions declared independence after holding referendums last month which were deemed illegal by the government in Kiev.
Ukraine and the West accuse Russia of supporting and arming the rebels - a claim denied by Moscow.
The rebellion began amid the turmoil which followed February's ousting of President Viktor Yanukovych, whose last-minute decision not to sign a landmark treaty with the European Union in November sparked mass street protests in Kiev.