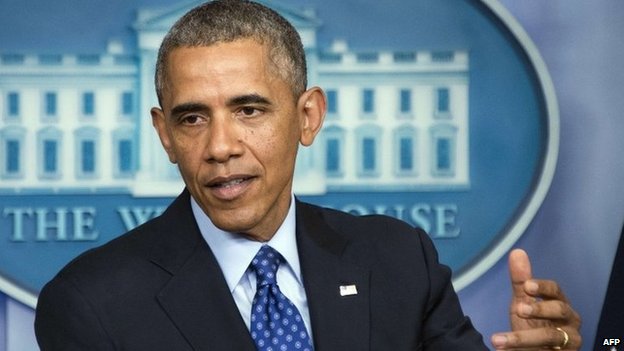 Mr Obama said the solution to the crisis must come from political agreement within Iraq
President Barack Obama says the US is ready for "targeted and precise military action" against Islamists in Iraq, "if and when the situation on the ground requires it".
But he stressed "American forces will not be returning to combat in Iraq".
He said that up to 300 military advisers would be sent to help the Iraqi government's efforts.
However, he stressed there was "no military solution" and said the crisis needed a political solution.
Iraq's government had asked the US for air strikes against the militants, led by the jihadist Islamic State of Iraq and the Levant (ISIS).
Mr Obama said it was not the US's place to choose Iraq's leaders, but urged them to pursue an "inclusive agenda".
That may be seen as a veiled criticism of Shia Prime Minister Nouri Maliki, who has been accused of anti-Sunni policies which have helped inflame unrest, correspondents say.
"The United States will not pursue military actions that support one sect inside of Iraq at the expense of another," Mr Obama said.
In addition to sending advisers, Mr Obama said that the US would be increasing intelligence efforts and setting up "joint operation centres in Baghdad and northern Iraq, to share intelligence and coordinate planning".
Mr Obama's statement came after a day in which fighting continued for control of the country's biggest oil refinery.
Officials insisted security forces were "in full control" of the Baiji refinery, about 200km (130 miles) north of the capital Baghdad.
But militants led by ISIS have surrounded the facility.
at June 19, 2014