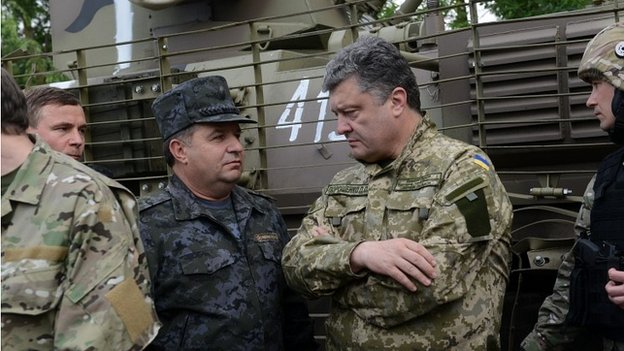 Ukraine's President Petro Poroshenko has declared a week-long unilateral ceasefire in fighting with pro-Russian militants in the east of the country.
Heavy fighting had been continuing between Ukrainian government forces and pro-Russia rebels, with new reports of military hardware entering Ukraine.
The ceasefire had been expected ahead of the implementation of a peace plan.
However, correspondents say pro-Russian insurgents show no sign of laying down their arms.
Kremlin unimpressed
Mr Poroshenko made his first trip as president to the troubled east on Friday, visiting Ukrainian troops and speaking to residents in the town of Sviatohirsk, north of rebel-held Sloviansk.
Speaking during his visit, he said the ceasefire "doesn't mean we won't fight back against any aggression towards our troops" but that it was intended to give rebels time to disarm.
"We will do everything to protect the territory of our state," he said.
The Kremlin dismissed the move, saying it was "not an invitation to peace and negotiations but an ultimatum".
Ukrainian news agencies quoted a senior rebel commander as saying the insurgents would not lay their arms until government troops had left the region.
The ceasefire comes a day after Mr Poroshenko held his second phone conversation this week with Russia's President Vladimir Putin.
The peace plan proposed by Mr Poroshenko promises to decentralise power and hold early local and parliamentary elections.
It also proposes the creation of a 10km (6 mile) buffer zone on the Ukrainian-Russian border, and a safe corridor for pro-Russian separatists to leave the conflict areas. 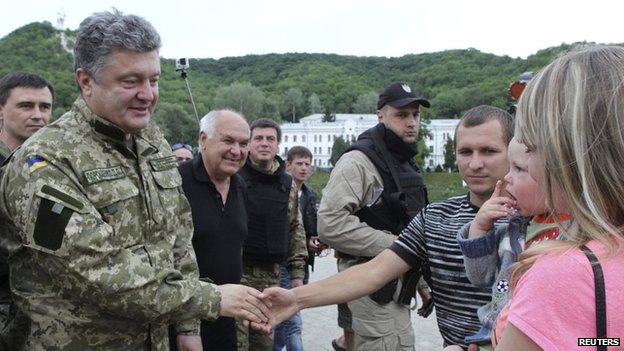 Mr Poroshenko spoke to local residents in the town of Sviatohirsk, north of rebel-held Sloviansk 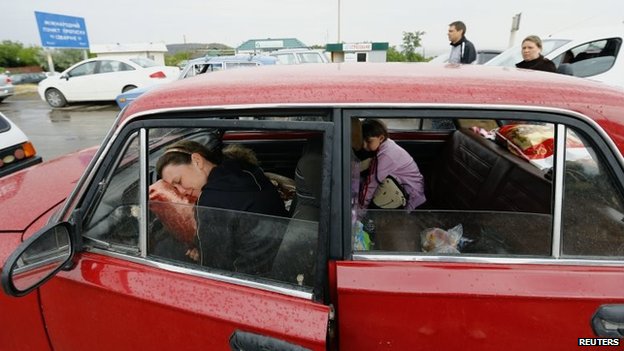 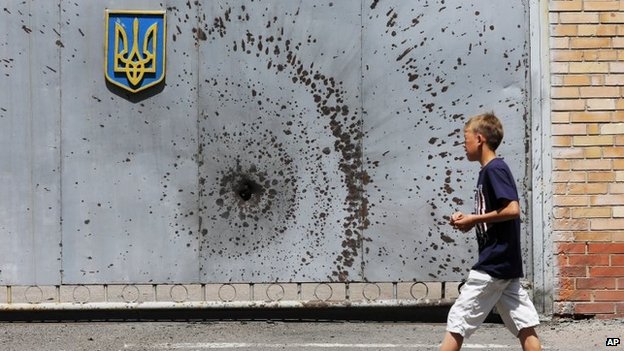 Fighting has continued in recent days, with this Ukrainian military unit showing damage from an attack

Analysis: David Stern, BBC News, Kiev
Many of the details of President Poroshenko's peace proposal are already known: a unilateral ceasefire, peace talks, increased autonomy to the regions, protection for the Russian language. What is unclear is how he intends to implement it, and what the reaction from the other side will be.
However, the pro-Russian insurgents seem to have no intention of laying down their arms, or even observing the ceasefire at all.
Russia likewise is sending highly mixed signals. President Putin has reacted favourably to Mr Poroshenko's proposal, and the two men are in communication.
But Ukrainian and Western officials say Moscow has resumed its troop build-up on the border. And there have been reports of Russian fighters, and possibly heavy military hardware, crossing into Ukraine.
Mr Poroshenko obviously is aware of all these realities. What remains to be seen is what he plans to do if the peace plan fails.

The White House said it was monitoring what it called a build-up of Russian forces on the border and would "not accept the use of any Russian military forces in eastern Ukraine".
A senior US official told AP that the US had issued fresh sanctions on Friday against pro-Russian separatists, including self-proclaimed rebel mayors, governors and commanders in chief in eastern cities.
The senior US official said Western countries would consider imposing tougher sanctions on Russia in the coming days.
The latest developments come amid tension between Russia and Ukraine over the removal of pro-Moscow President Viktor Yanukovych and Russia's annexation of Crimea.
Mr Poroshenko said on Thursday he would sign a controversial association agreement with the EU on 27 June.
Mr Yanukovych was overthrown in February after refusing to sign the deal at the last moment.