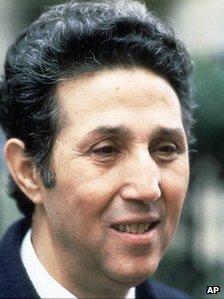 The first president of independent Algeria, Ahmed Ben Bella, has died at his home in Algiers following an illness, official media say.
Mr Ben Bella, who was 95, had recently been treated in hospital for respiratory problems.
Mr Ben Bella led Algeria to independence from France before becoming president in 1963.
He ruled Algeria as head of a one-party state but three years later was overthrown by the head of the army.
The BBC's Chloe Arnold, in Algiers, says that while Mr Ben Bella's policies were controversial, he was widely respected for his struggle against French rule.
In later years, our correspondent says, he became an advocate for democracy, rejecting the growing Islamist elements in Algerian society amid the bloody conflict between militants and security forces in the 1990s.
Revolutionary leader
Mr Ben Bella was born in a rural area near the Moroccan border in 1916, and fought with distinction with the Free French Forces in Italy during World War II and won five gallantry medals.
But he became disillusioned with French rule on his return to Algeria after the war, and was elected municipal councillor for the anti-colonialist "Movement for the Triumph of Democratic Liberties."
When the movement was declared illegal, Mr Ben Bella went underground.
Arrested in May 1951, he was interned but staged a dramatic escape two years later. 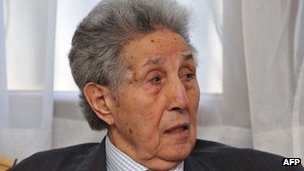 Ahmed Ben Bella in 2010: his death coincides with 50 years of Algerian independence
He fled to Cairo where he planned the 1954 uprising which began Algeria's war of independence.
He was imprisoned by the French, but was the acknowledged head of the independence movement throughout the revolution.
After he was deposed he spent many years in prison, then under house arrest, and went into exile in Switzerland in 1980.
He was officially pardoned in 1990.
His death coincides with the 50th anniversary of Algerian independence.
at April 12, 2012