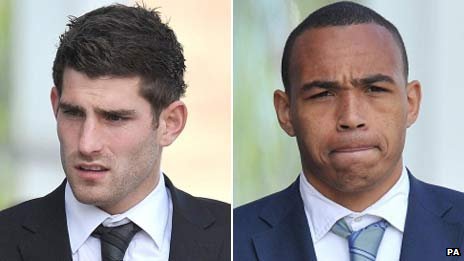 Ched Evans (left) and Clayton McDonald at Caernarfon Crown Court
Two footballers raped a drunk woman as a third man tried to film them through a hotel window on a mobile phone, a court has heard.
Wales and Sheffield United striker Ched Evans, and Port Vale defender Clayton McDonald, both 23, deny the attack at a Premier Inn near Rhyl, Denbighshire.
Caernarfon Crown Court heard that both admitted having sex with the 19-year-old, described as too drunk to consent.
The trial is expected to continue into next week.

End Quote John Philpotts Prosecuting
John Philpotts, prosecuting, said Mr McDonald, of Crewe, Cheshire, and Mr Evans, of Penistone, South Yorkshire, had told police they had sex with the complainant, who cannot legally be identified.
Mr Philpotts said that while the alleged attack happened Jack Higgins, an "associate" of the footballers, and Ryan Roberts, Mr Evans's brother, watched through a window.
Video recordings found on Mr Higgins' phone showed he had been filming or trying to film the incident, he said.
The court heard that the pair had spent the night of Sunday, 29 May, 2011 socialising with friends in Rhyl. 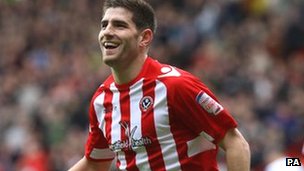 Ched Evans joined Sheffield United for £3m in 2009
In the early hours of Monday, 30 May, Mr McDonald got into a taxi which the complainant had flagged down.
He then took the woman, whom he had seen fall over in a kebab shop, to the Premier Inn hotel as he called someone on his phone to say he had "got a girl".
The complainant had been drinking wine, vodka with lemonade and had also had a Sambuca shot, the jury was told.
A hotel receptionist described the woman, who was 19 at the time and worked in a restaurant, as "extremely drunk" and said she was stumbling and slurring and occasionally grabbing hold of Mr McDonald to steady herself.
Shortly after, Mr Evans, originally from St Asaph, Denbighshire, arrived at reception and asked for the keys to a room, while two other men waited outside.
'Suitable target'
Mr Philpotts said: "Ched Evans had booked that room with the main or sole purpose of procuring a girl or girls that night. 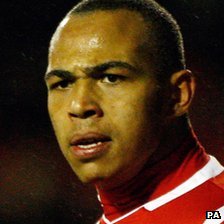 Defender Clayton McDonald signed for Port Vale last season
"He and Clayton McDonald were on the lookout for any girl who was a suitable target and the claimant had literally stumbled across their path."
After Mr Evans went into the hotel, the receptionist decided to check what was happening in the room, the court heard.
"It was not difficult to guess," said Mr Philpotts.
The court was told the receptionist saw the two men who were waiting outside watching what was happening in the room through the window.
Mr Evans and Mr McDonald later told police they "separately" had sex with the claimant in the room.
Mr Philpotts said: "The prosecution say that she did not truly consent to that activity.
"She was in no fit state to consent.
"And we say that neither man reasonably believed she was consenting."
at April 12, 2012