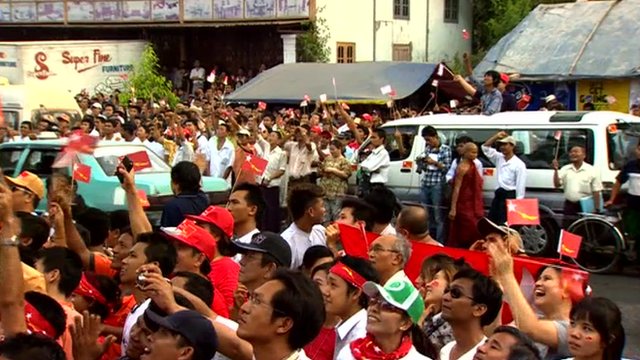 Cannot play media. You do not have the correct version of the flash player. Download the correct version
At the pro-democracy headquarters in Rangoon, unofficial results were announced and party supporters celebrated
Continue reading the main story

Burma's Nobel laureate Aung San Suu Kyi has won a by-election for parliament, her party says, after a landmark vote that saw 45 seats contested.
Ms Suu Kyi's opposition National League for Democracy (NLD) said she had easily won in Kawhmu, though no official results are expected before Monday.
In a statement, she urged supporters to show restraint in their celebrations.
The vote is a key test of political reforms, though the army and its allies dominate the 664-seat parliament.
The NLD was competing in its first elections since 1990.
'Dignified'
Thousands of people who gathered outside the NLD headquarters in Rangoon danced and cheered at reports that Ms Aung San Suu Kyi had won her seat.
"It is the people's victory! We have taught them a lesson," one shopkeeper wearing an NLD T-shirt told the Associated Press news agency.

Jonah Fisher BBC News, Burma
With the Kawhmu result close to a foregone conclusion, thoughts are already turning to what sort of a local parliamentarian Ms Aung San Suu Kyi will be.
"We need better transportation and opportunity for young people here," said U Myo Khine, a father of two, as he watched her convoy pass by.
Others have their eyes on the much greater prize, the general election of 2015.
"The army has changed and are now more lenient," said NLD official Myo Win. "So there is more of a possibility that Aung San Suu Kyi can become president in 2015."

Ms Suu Kyi said in a statement: "It is natural that the NLD members and their supporters are joyous at this point.
"However, it is necessary to avoid manners and actions that will make the other parties and members upset. It is very important that NLD members take special care that the success of the people is a dignified one."
During the campaign, foreign journalists and international observers were given the widest access for years.
The European Union hinted that it could ease some sanctions if the vote went smoothly.
The BBC's Rachel Harvey in Rangoon says the NLD alleged some voting irregularities in the capital, Nay Pyi Taw.
NLD spokesman Nyan Win told AFP news agency he had sent a letter of complaint to the election commission over allegations ballot forms had been tampered with.
He said there had been complaints that wax had been put over the tick-box for the party, which could later be rubbed off to cancel the vote.
"This is happening around the country. The election commission is responsible for what is occurring," he said. 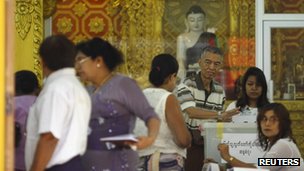 Burma's current government is still dominated by figures from the old military regime that ruled the country for decades and was accused of widespread rights abuses.
But since 2010, when a political transition began, the government has impressed observers with the pace of change.
Most political prisoners have been freed, media restrictions have been relaxed and, crucially, Ms Suu Kyi and the NLD have been persuaded to rejoin the political process.
They have taken no part in Burma's politics since 1990, when the NLD won a landslide victory in a general election but the military refused to accept the result.
Ms Suu Kyi spent much of the following 20 years under house arrest and refused to take part in the 2010 election, which ushered in the current reforms.
The NLD was one of 17 opposition parties that took part in Sunday's election. Only a fraction of seats were up for grabs and the military-backed party will still dominate.
Ms Aung San Suu Kyi, 66, was standing for a lower house seat in the Kawhmu Township constituency, outside Rangoon.
On Sunday, she visited polling stations in Kawhmu before heading back to Rangoon.
Our correspondent says regardless of the outcome of the by-elections, Burma's balance of power will not change overnight and full democracy is still a long way off.
She says all Burma's ethnic minorities must be made to feel they have a voice in the political system and that President Thein Sein still needs to convince more wary parliamentarians that it is in the country's interests to open up to the outside world.
at April 01, 2012