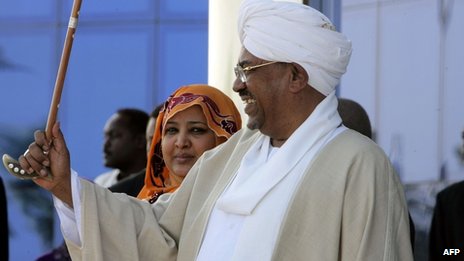 Sudan President Omar al-Bashir has said his main goal is now to "liberate" the people of South Sudan from its rulers following recent border clashes.
The former rebel Sudan People's Liberation Movement has ruled South Sudan since it seceded from Sudan in July 2011.
President Bashir was addressing a rally at his party's headquarters.
Fighting between the two countries has now spread to another area, further adding to fears of all-out war.
South Sudan seized the Heglig oil field - generally recognised as Sudanese territory - eight days ago. On Tuesday fighting broke out north of Aweil in South Sudan, about 100 miles (160km) west of Heglig.
The South Sudanese military said 22 soldiers had been killed, with casualties on both sides.
'By hook or crook'

Main disputes between the two Sudans

Mr Bashir told the rally "the story began in Heglig, but it will end in Khartoum or Juba," according to the AFP news agency.
The current spate of fighting is the worst since South Sudan's independence last year, which followed two decades of civil war between Mr Bashir's government and the SPLM.
Mr Bashir said he had made a "mistake" in putting the SPLM in power in Juba.
He told the crowd that his message to the SPLM was: "Either we end up in Juba and take everything, or you end up in Khartoum and take everything."
A Sudanese foreign ministry official said Sudan would end the occupation of Heglig "by hook or crook".
A non-Sudanese source close to the border talks told the BBC that during years of discussions before its independence, South Sudan never claimed Heglig as part of its territory.
In a separate development, the world's newest country became a member of the World Bank and the International Monetary Fund on Wednesday.