Syria fighting 'kills 100' ahead of ceasefire

Syria fighting 'kills 100' ahead of ceasefire 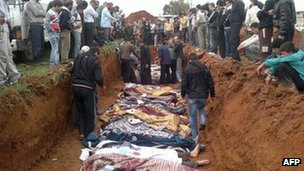 At least 100 people have died on one of the bloodiest days in the Syrian uprising, according to unverified reports, days ahead of a ceasefire.
Clandestine monitors inside Syria say more than 30 died in Latamneh, a suburb of the city of Hama, as a result of government shelling.
Video said to be from Homs showed 13 victims of an apparent mass execution.
UN chief Ban Ki-moon has warned the government not to use the impending truce as an "excuse for killing".
Turkey says refugee arrivals from Syria have doubled since President Bashar al-Assad agreed to implement a peace plan from the UN and Arab League.
The six-point plan, mediated by former UN chief Kofi Annan, envisages a cessation of armed violence by all parties from 10 April, with a full ceasefire on 12 April.
However, the Syrian opposition, the US and many countries in the region have expressed scepticism that Syria is committed to the plan.
In the capital, Damascus, thousands of supporters of Mr Assad attended a rally to mark the 65th anniversary of the ruling Baath Party.
'Dead toddler'
A death toll of 107 was reported by the Syrian Observatory for Human Rights, which said it included 74 civilians.
Another monitoring group, the Local Co-ordination Committees, gave a figure of 133, not including members of the Syrian security forces.
In Latamneh, dead bodies were piled in flatbed vehicles and driven away as distraught townspeople looked on, activists' videos showed.

Footage posted on the internet showed emotional scenes as the bodies were buried, with a dead toddler being held aloft and the bodies of adults laid out on the ground in shrouds.
Further to the south, the Deir al-Baalba quarter of Homs, Syria's third-biggest city, was among several districts which monitors said were being pounded relentlessly by government tanks and artillery.
Unverifiable video footage from the same quarter showed a pile of 13 dead bodies at the foot of a bloodstained and bullet-pocked wall, suggesting a mass summary execution.
In other incidents reported by monitors 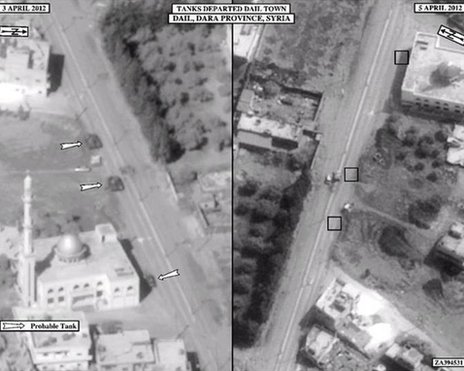 The photos published by the US show some withdrawals of tanks from populated areas
Satellite photos published by the US Ambassador to Damascus, Robert Ford, show Syrian artillery and tanks were still close to populated areas this week, despite some withdrawals.
"This is not the reduction in offensive Syrian government security operations that all agree must be the first step for the Annan initiative to succeed," Mr Ford said in Washington.
"The regime and the Syrian people should know that we are watching. The regime cannot hide the truth."
The latest violence strengthens the impression that, as the Tuesday truce deadline approaches, the government has decided to continue battering centres of resistance whatever the cost, the BBC's Jim Muir reports from Beirut.
Damascus appears to be ignoring strong words from the UN head, who warned it would be held accountable, our correspondent says. 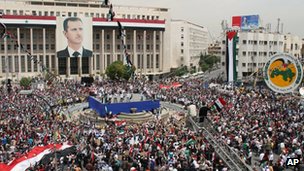 Damascus held a rally to mark the 65th anniversary of the ruling Baath Party
The Syrian government has sent letters to the UN blaming what it calls "armed terrorist groups" for the violence, saying they have escalated their attacks since the Annan peace plan was accepted.
A UN team is currently in Damascus to negotiate the possibility of deploying UN monitors to oversee any ceasefire.
Mr Annan has said that if the truce is successful, a small mobile UN monitoring mission of some 200-250 observers could be brought into Syria.
The UN estimates more than 9,000 people have died in the year-long uprising against the rule of President Assad.
Turkey said that if the influx of refugees continued at the current rate, it would need international assistance. More than 2,800 Syrians have crossed the border in 36 hours, with the total now near 24,000.
at April 07, 2012