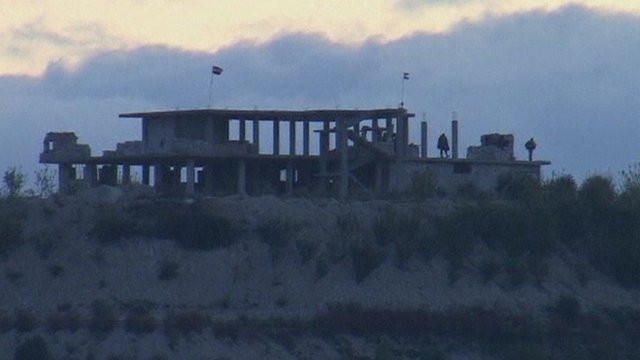 Cannot play media. You do not have the correct version of the flash player. Download the correct version
Advertisement
The BBC's Jim Muir, in Beirut, says there are many issues that must be overcome in order for the ceasefire to hold
Continue reading the main story

A ceasefire has come into force in Syria amid doubts expressed by Western countries about the government's willingness to stick to it.
Correspondents say the truce appears to be largely holding, with no reports of casualties or deaths so far.
However there were some reports of shelling and firing in the early hours.
The Syrian government and the armed opposition have both said they will abide by the ceasefire, but reserved the right to respond if attacked
Syrian foreign ministry spokesman Jihad Makdissi told the BBC the government was "fully committed" to the cessation of all military operations "as long as we have no armed violence against the state".

Jim Muir BBC News, Beirut
So far, the ceasefire has held as well as anyone could have expected. But there are many ways in which it could come unstuck, and a huge task remains to be accomplished if it is to be converted into a stable peace.
Government troops, tanks and heavy weapons remain in and around populations centres. Their withdrawal was to have been the first step in the Annan peace process, to be completed last Tuesday.
Rebel fighters have said they will resume their attacks if the military is not withdrawn. That would provide justification for the regime to resume its crackdown.
The deployment of UN observers might help stabilise the truce. But negotiations over their frame of reference seem to have hit snags.
Under the Annan plan, protestors should have the right to demonstrate freely. But security forces are unlikely to allow them to gather in city centres, especially in Damascus, so friction may ensue.
Behind all this lies the massive question of what kind of a Syria will emerge, an issue fiercely contested not just within the country, but by regional powers.

"If those people at the external opposition want the full benefit of their own country, they have to come to the table of negotiation and table of dialogue."
The ministry had also written to UN-Arab League envoy Kofi Annan - who brokered the plan - pledging to observe the truce while reserving the right to "respond proportionately" to rebel attacks.
US ambassador to the UN Susan Rice described the caveats as "worrying" and added that the onus was on the regime to halt the violence.
Col Kassem Saadeddine, of the main armed rebel group, the Free Syrian Army (FSA), said that if the regime "does not stop shelling and not withdraw tanks, we will intensify our military operations and launch attacks.
'New protests'
The BBC's correspondent in Beirut, Jim Muir, says there were some reports of shooting and shellfire early on Thursday in cities including Idlib and suburbs of the capital, Damascus, but that the truce appeared to be largely holding.
If it continues, the focus is expected to fall on the withdrawal of government troops, tanks and heavy weaponry, says our correspondent. That step was supposed to have been completed on Tuesday.
However, there is a long way to go before the situation can be considered stable, he adds.
The main political opposition group, the exiled Syrian National Council (SNC), said a new wave of protests against President Bashar al-Assad would begin as soon as a ceasefire began, which would test the government's pledges.
"We call on the people to demonstrate and express themselves," SNC leader Burhan Ghalioun told AFP news agency in Beirut.
"The right to demonstrate is a principle point of the plan," he said. 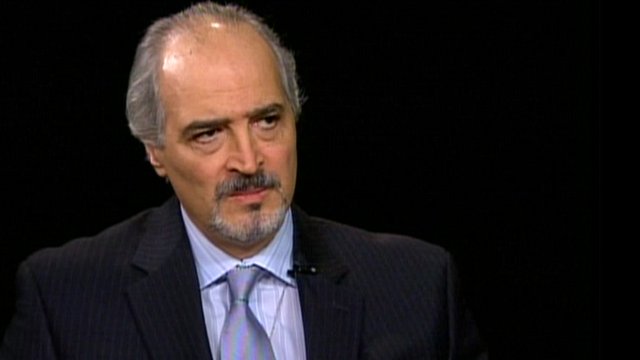 Cannot play media. You do not have the correct version of the flash player. Download the correct version
Advertisement
Syrian Ambassador to the UN Bashar Jaafari insisted that the Syrian regime wanted to see "drastic" reforms - clip courtesy of Charlie Rose/PBS
Mr Annan is due to brief the UN Security Council later on Thursday.
If his peace plan fails, some members of the Security Council have said they will push for tougher action. Correspondents say this may not necessarily mean military intervention, but perhaps sanctions.
British Foreign Secretary William Hague said the UK was ready to work at the UN to send monitors to Syria once a ceasefire was in place, "to make sure they can't slide back to renewed conflict".
But if the ceasefire collapsed, the UK "will want to return to Security Council in a new attempt to obtain a resolution on Syria, we'll intensify our support for the opposition and we will seek stronger sanctions".
Weapons debate
Following a phone call between German Chancellor Angela Merkel and US President Barack Obama, the two leaders said they "shared the concern that the Assad government was not complying with the terms of the agreement negotiated by Kofi Annan".
Russia and China, who have blocked previous UN Security Council action against Syria, both welcomed the ceasefire but said the rebels must respond in kind.

1. Syrian-led political process to address the aspirations and concerns of the Syrian people
2. UN-supervised cessation of armed violence in all its forms by all parties to protect civilians
3. All parties to ensure provision of humanitarian assistance to all areas affected by the fighting, and implement a daily two-hour humanitarian pause
4. Authorities to intensify the pace and scale of release of arbitrarily detained persons
5. Authorities to ensure freedom of movement throughout the country for journalists
6. Authorities to respect freedom of association and the right to demonstrate peacefully

US Secretary of State Hillary Clinton will meet her Russian counterpart Sergei Lavrov in Washington DC on Thursday during a G8 foreign ministers summit.
Some influential voices in the US Congress have also been calling for the Syrian opposition to be armed.
President Obama has opposed that course of action, but on Wednesday he met the defence minister of Saudi Arabia, which supports arming the opposition.
Any further action would need the agreement of Russia and China.
The violence had continued on Wednesday, with activists reporting at least 30 people killed in offensives around the country.
The UN estimates about 9,000 people have died since anti-government protests began in March 2011. In February, the Syrian government put the death toll at 3,838 - 2,493 civilians and 1,345 security forces personnel.