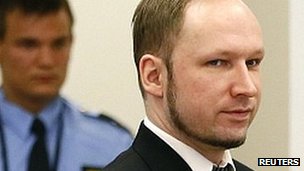 Anders Behring Breivik has told his trial in Oslo he believes there can be only two "just" outcomes to his trial - acquittal or the death penalty.
Breivik, who killed 77 people last July, said he considered a lengthy jail sentence "a pathetic punishment". Norway does not have the death penalty.
He also said he had been "very surprised" to have survived the day of the attacks.
Prosecutors have been quizzing him on his links with militant nationalists.
On the third day of the trial they have been trying to disprove his claim of the existence of a far-right European network.
'Pathetic punishment'
Under cross-examination, Breivik said: "There are only two just and fair outcomes of this trial - acquittal or capital punishment. I consider 21 years of prison as a pathetic punishment.
Asked if he wanted the court to give him the death penalty, he replied: "No, but I would have respected it. I would not recognise 21 years of prison, it's ridiculous."
Breivik killed 69 people at a Labour Party youth camp on Utoeya island, having first set off a bomb outside a government building in Oslo that killed eight people.

Matthew Price BBC News, Oslo
Breivik's been really defensive in court this morning. From my vantage point a few feet from him, he seems less relaxed and appears to feels less in control. He's sitting back in his chair, one arm resting on the table in front of him.
The prosecution has really been pushing him hard to give details about the networks of militant nationalists he says he became part of - about his supposed contacts with Serb nationalists in Liberia, and with English nationalists in London.
They simply do not believe that he did form links with such people. They're trying to discover whether he's a fantasist. And he is definitely on the back foot. As he left for a recess, he gave a big smile to his lawyer. But his face is flushed and he seems to be under pressure.

He has said he carried out the attacks to defend "ethnic Norwegians" from rising multiculturalism.
"I was very surprised that I survived that day," he told the court on Wednesday.
"I had no other plans for what to do. I considered the chance less than 5% that I would survive the bombing. But not only that, I survived Utoeya."
Breivik was also questioned about his religious beliefs by a lawyer for the victims.
"Well, I am a militant Christian; to prevent the de-Christianisation of Europe is very important," he said.
"But this does not mean we want to introduce a Christian theocracy. We are not Christian fundamentalists. I believe in God and I believe in a life after death."
Answering questions from a judge he described himself as an "anti-Nazi".
"A National Socialist would say, 'Norway for the Norwegians'. I am more liberal, I would accept 2% perhaps (of the population not being ethnically Norwegian)."
The court is seeking to establish whether Breivik is sane and can be jailed.
Earlier, Breivik said the far-right network, which he named as the Knights Templar, met in London to decide on its platform.
He said the group was "not an organisation in a conventional sense" but consisted of "independent cells". 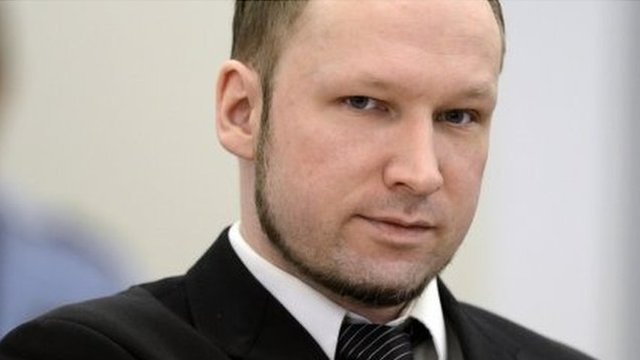 Cannot play media. You do not have the correct version of the flash player. Download the correct version
Advertisement
Doubt cast on Breivik extremist links
Prosecutor Inga Bejer Engh told him the purpose of her questioning was to shed doubt on the network's existence.
In other parts of his testimony on Wednesday, Breivik told the court:
The prosecution showed the court an excerpt from Breivik's 1,500-page manifesto.
He wrote that he underwent a "complete screening and background check" for the Knights Templar to ensure that he was of "the desired calibre".
He claimed the group was considering "several hundred" individuals throughout Europe for a training course.
Breivik has begun each court appearance with a right-wing clenched-fist salute.
His lawyers, addressing reporters after the day's hearing was adjourned, said they had asked him to stop making the gesture.

Breivik's testimony, and that of his witnesses, is not being broadcast. His testimony is expected to last for a total of five days.
The leader of a support group for survivors of the 22 July attacks and victims' families says Breivik will be judged as a mass murderer, not as a man with a political agenda.
"The focus from our point of view is that he is not tried for his political views; he is on trial because he killed people, killed youngsters on Utoeya and my colleagues in the government quarters and that is the main focus for us," said Trond Blattmann.
The BBC's Steve Rosenberg, in Oslo, says a contradictory picture of Breivik is emerging - a man who hates Muslims, but admired Osama Bin Laden and al-Qaeda.
Our correspondent says Breivik sees himself as a great Crusader, when in fact he was a high school drop out, a failed businessman and an addict of computer war games.
Earlier, Breivik's lawyers warned that many Norwegians would find his comments upsetting.
If Breivik is judged sane and found guilty of murder, he faces a maximum of 21 years in jail, although that can be extended if he is deemed a threat to the public.
If he is judged to be insane, he will be committed to a psychiatric institution.
at April 18, 2012