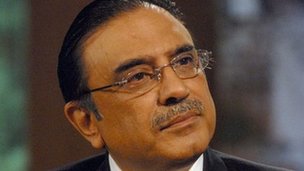 Pakistan's President Asif Ali Zardari will travel to India later this month, officials say, as tensions ease between the nuclear-armed neighbours.
Mr Zardari will visit, in a private capacity, the shrine of a famous Sufi Muslim saint, in north-west Rajasthan state, his spokesman said.
He held out the possibility that it could turn into an official visit.
This will be the first visit to India by a Pakistani head of state for seven years, the BBC's Jill McGivering says.
Tensions between the two countries have eased in the last year, and there have been notable efforts to improve mutual trade, she adds.
Mr Zardari will travel to the Ajmer Sharif shrine in Rajasthan "very soon", presidential spokesman Farhatullah Babar said, adding that the exact dates had not yet been worked out.
"It has been on the cards, and now it is confirmed," he told Reuters news agency.
"It was supposed to be a private visit. But what it turns out (to be) finally, whether private, official, or private (and) official, has yet to be confirmed."
Dialogue between India and Pakistan is being strongly encouraged by the United States in particular, as it is keen to promote regional stability ahead of the withdrawal of Nato-led forces in Afghanistan, our correspondent says.
at April 01, 2012