Baboons recognise words on a screen 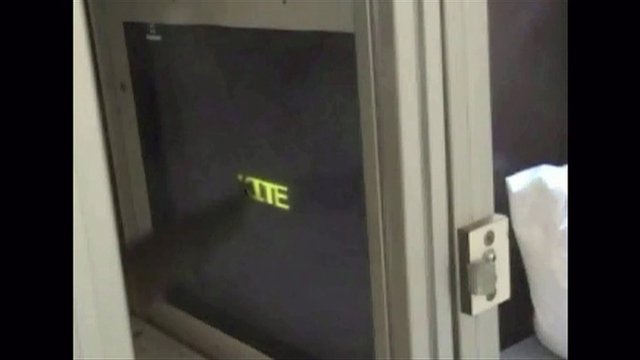 Baboons can recognise four-letter words on a computer screen, according to scientists in France.
Researchers found the monkeys could tell the difference between actual words and nonsense letter combinations.
After being trained, the baboons were able to make this distinction, despite not being capable of reading.
The results suggest the ability to recognise words could more closely relate to object identification than linguistic skill. 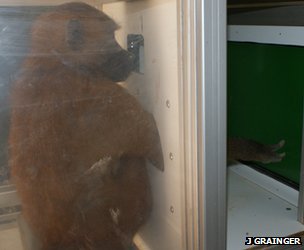 The baboons received a treat for correctly identifying words
The study, completed by Dr John Grainger and Dr Joel Fagot from the Aix-Marseille University was published in the journal Science.
"It was by no means a foregone conclusion that the baboons would be able to master our word-non-word discrimination task, so we were quite excited about the simple fact that they did succeed," said Dr Grainger.
The researchers tested a group of Guinea baboons in a specially built facility at the university.
"In this research, the animals are completely free to participate, and are automatically identified by the test computers when they quit their social group to voluntarily enter one of the 10 possible test systems," explained Dr Fagot who designed the system.
Inside the test booths the baboons were presented with a computer screen that displayed either a four-letter word or a nonsensical jumble of letters.
To earn a treat from the automated system, they had to correctly touch either a plus sign to signify a non-word or an oval for a word. 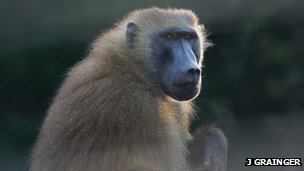 Dr Fagot explained that the baboons had extensive training: performing the tests up to 61,000 times.
"The monkeys pay maximum attention to what they are doing because they decide to participate," he said.
One in particular, named Dan, could recognise up to 300 words correctly.
"Cognitive abilities vary among humans too, and it is not so surprising that differences emerge between the individual [baboons]," said Dr Fagot.
Dr Grainger told BBC Nature that recognising letter sequences - previously considered a fundamental "building block" of language - could be related to a more simple skill.
"The baboons use information about letters and the relations between letters in order to perform our task... This is based on a very basic ability to identify everyday objects in the environment," he said.
at April 13, 2012