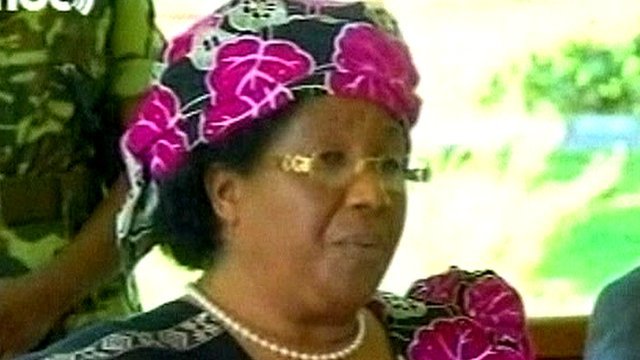 Malawi's Vice-President Joyce Banda has been sworn in as president following the death of Bingu wa Mutharika.
She becomes southern Africa's first female head of state after taking the oath before parliament in the Malawian capital, Lilongwe.
Ms Banda, who had been vice-president since 2009, was cheered and applauded before, during and after the ceremony.
Mr Mutharika, 78, went into cardiac arrest on Thursday, although his death was not confirmed until Saturday.
The delay in announcing his death had prompted fears of a power struggle.
There had been speculation that the late president's inner circle was trying to circumvent Malawi's constitution to prevent Ms Banda from taking over and instead install his brother, Foreign Minister Peter Mutharika.

Who is Joyce Banda?

Ms Banda had fallen out with Mr Mutharika in 2010 and became one of his fiercest critics. She was expelled from the ruling Democratic People's Party (DPP) and formed the People's Party.
She was elected as vice-president in 2009 and Mr Mutharika had failed in his attempts to have her removed from her post.
In taking the oath of office, Ms Banda pledged to "defend and preserve the constitution" and to do right to all manner of people, according to law.
She then asked parliament to stand for two minutes' silence as a tribute to Mr Mutharika.
Asking Malawians to "focus on mourning our father," Ms Banda added: "It is with a great sense of humility and honour that I accept the huge responsibility of that the people of Malawi have entrusted me with."
At present, there are just a handful of MPs in her party but the BBC's Raphael Tenthani in Blantyre says many more are likely to join now that she is president.
On Friday, Information Minister Patricia Kaliati had said Ms Banda could not take over as head of state because she had gone into opposition. The UK, the US and the EU all called on Malawi to respect its constitution.
Appeal for calm 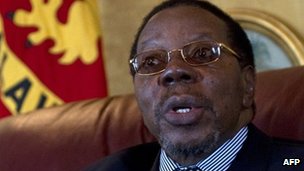 There have been growing protests against Mr Mutharika over the last year
Shortly after Mr Mutharika's death was confirmed, Ms Banda addressed journalists, flanked by the heads of the army and police, the attorney general and other officials.
She said funeral arrangements would soon be discussed and that 10 days of national mourning would be held.
She also said preparations were being made to bring Mr Mutharika's body back from South Africa, where he was taken after his cardiac arrest.
Mr Mutharika governed Malawi for eight years, but was recently accused of mismanaging the economy and becoming increasingly autocratic.
He fell out last year with Britain, the former colonial power, which withdrew its direct aid, accusing the Malawian government of mishandling the economy and of failing to uphold human rights.
Malawi is one of the poorest countries in the world, with an estimated 75% of the population living on less than $1 (60p) a day.
The country has suffered shortages of fuel and foreign currency since the UK and other donors cancelled aid.
at April 07, 2012