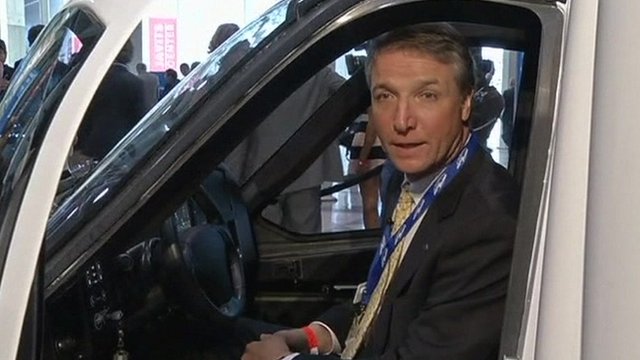 US company Terrafugia has put on display a prototype car that is licensed to fly as well as drive, at the New York International Auto Show.
It is the first vehicle in the world to have met both the standards of the FAA (Federal Aviation Administration) and the NHTSA (National Highway Traffic Safety Administration), according to Cliff Allen, Vice President of Sales at Terrafugia.
This makes it the first "street legal aeroplane", he said.
Known as the Transition, the versatile vehicle has two seats, four wheels and retractable wings.

We were curious to see how it would take off”

End Quote Dr Samuel Schwegart Engineer, Terrafugia
It is expected to be available next year, with a price tag in the region of $279,000 (£176,300).
Test flight
The vehicle currently has an experimental certificate from the FAA, meaning the company has permission to fly it in US airspace for test purposes. The company hopes in time it will gain a light sport aircraft licence.
The hybrid vehicle completed its first successful test flight at Plattsburgh International Airport near Montreal in Canada last month.
A retired US Air Force test pilot took the maiden voyage - after volunteering his services. 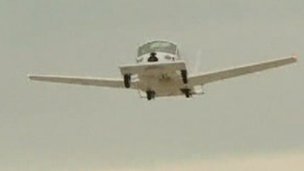 Transition completed a successful test flight on 23 March this year at Plattsburgh International Airport
"We are very fortunate to have found him," said Dr Samuel Schwegart, an engineer at Terrafugia working on the project.
The vehicle flew at 1,400 feet for eight minutes.
However, important details still need to be worked out from test data, including the stall speed of the aircraft.
There are significant design challenges marrying a roadworthy vehicle with a skyworthy one, according to Dr Schwegart.
"We were curious to see how it would take off," says Dr Schwegart. "Unlike a normal plane, it cannot rock back on its rear wheels at the moment of take-off, because it is designed to be stable as a car on the road."
The engineers also found that Transition needed more speed than anticipated on take-off, to generate the necessary lift for ascent.
A hard landing was also reported, but nothing of concern, according to Dr Schwegart.
Maintenance levels
"You can pull up at a regular gas station to fill it up", says Dr Schwegart. A full tank holds 23 gallons (87 litres) of fuel. 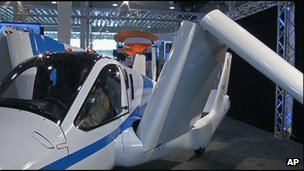 The vehicle has retractable wings allowing it to fit in a suburban garage
It requires Premium 91-octane fuel, and does 35 miles to the gallon (6.7l/100km) on the road, and 28 mile (8.4l/100km) in the air.
"The discrepancy is because of drag," according to Dr Schwegart.
Although Transition can be stored in a normal garage, it needs a 1,700-foot (520-metre) runway to take off.
According to the company, this is no problem, as there are 5,000 state airports in the United States. And there are a further 5,000 private ones, which might just mean a simple runway belonging to a farmer in a field.
Terrafugia calculates that you are rarely further than half an hour from a take-off point - and there are apps like Foreflight which will tell you where the nearest one is, whether you are on the ground, or up in the air hoping to come down.
"You just do your pre-flight checks, unfold your wings and away you go," says Dr Schwegart.
Target Market
The initial target market was existing pilots, but the company is now reaching out to people with no aviation background. 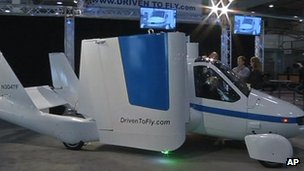 Terrafugia says the New York Auto Show has expanded their order book
The vehicle offers an "advanced level of freedom in life, more efficiency in personal travel", according to a company representative.
The company currently has 100 pre-orders, which in their current small production facility in Woburn, Massachusetts, already means a two-to-three-year backlog.
With a range of 644 miles (1,035km) on a full tank, the vehicle could in theory make a non-domestic journey. For the time being, however, the vehicle is restricted by its licence to flying in the United States.
at April 09, 2012