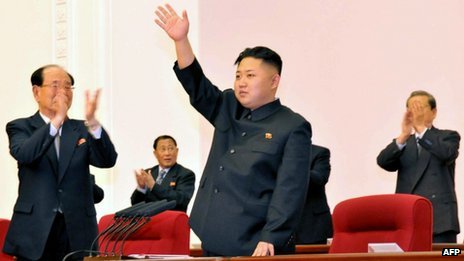 North Korea's new leader Kim Jong-un has been given two posts previously occupied by his late father.
State media said the younger Kim had been named chairman of the party's Central Military Commission and a standing member of the Politburo.
The announcement came after North Korea held a rare party conference widely expected to see more power formally transferred to Kim Jong-un.
The country is due to launch a rocket, set to go between Thursday and Monday.
North Korea says the rocket will put a satellite into orbit but the US says the launch is a disguised test of long-range missile technology.
The launch path will take the rocket south between the Philippines and Japan. Both South Korea and Japan have said that they will shoot it down if it threatens their territory.

North Korea often looks like a place marooned, a survivor from an age when Soviet republics, with their strongmen rulers, were common”

The news of Kim Jong-un's new titles came after the ruling Korean Workers' Party held a conference on Wednesday.
At the meeting, the party also promoted the younger Mr Kim to "first secretary" and named his late father as its "general secretary for eternity", state media said.
The country's rubber-stamp parliament is also meeting on Friday and the two meetings have been seen as forums for advancing the transition of power to Kim Jong-un following the death of his father in December 2011.

Leadership titles: Who has what?

Then on Sunday North Korea will mark the 100th anniversary of the birthday of national founder Kim Il-sung - the younger Kim's grandfather - with mass celebrations.
North Korea says that the rocket launch is to commemorate Kim Il-sung. It says that the satellite will send back weather and other data.
But critics say that the launch constitutes a test of long-range missile technology banned under UN resolutions.
The rocket is due to launch any day between 12 and 16 April from the Tongchang-ri site on the country's north-west coast.
A number of airlines have altered flight paths and the US has sent a ship-mounted radar to monitor the launch.
Japan said it was on alert ahead of the launch. "We want to be fully prepared for any possible contingency," Prime Minister Yoshihiko Noda said.
Pyongyang agreed in February to a partial freeze in nuclear activities and a missile test moratorium in return for US food aid. But that deal was put on hold last month after the North announced its rocket launch plans.